440 Locust Street
Montgomery Wards had a store here for many years. The current building was erected in 1915-1916 to house the Adams & Sons Automobile showroom and repair shop. Much earlier in this location, the Platter Brothers had a very successful livery and horse sale barn as well as one of the earliest known opera houses above their stable. 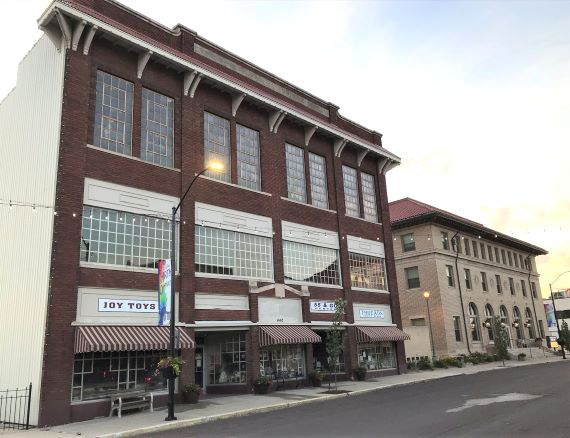 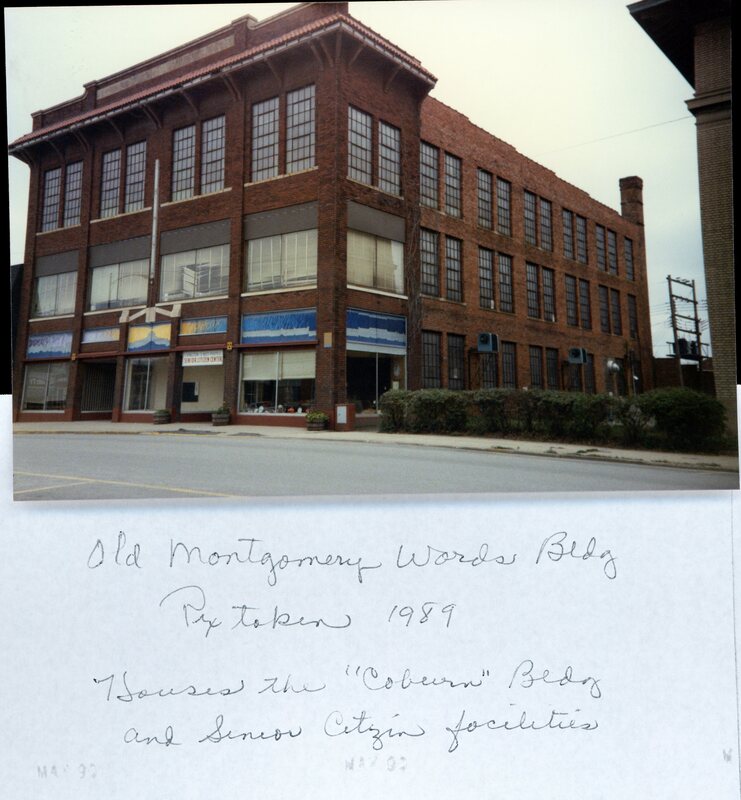 Photo on file at the Livingston County Library archives.
The Senior Citizens Center moved in on July 30, 1977. They operated an Oates Transportation bus out of this building from about 2001 to 2011. Various entities related to the senior center occupied space in the building such as the Northwest Missouri Area Agency on Aging, Access II Independent Living, and the American Red Cross. Concerned Citizens RSVP (Retired Senior Volunteers Program - now 55&Go) signed a lease for use of the building on July 30, 2010. In 2019, the building housed 55&Go, Threads thrift store, and Joy Toys on the first floor.
Throughout the 1980s and 90s this was known as the Coburn building, for the Coburn family that owned it. Richmond Coburn donated the 30,000-sq. ft. building to the City of Chillicothe on Dec. 31, 1974, in honor of his parents, Alexander "Andy and Mary Coburn. There was one deed restriction: that the building be used for public purposes. Andy Coburn was a superintendent of the school system here. He later became a businessman (Mutual Life Insurance Company) and mayor of Chillicothe.This building  ended up in the Coburn family in about 1928 when the court assigned Andy Coburn to manage the business and property during bankruptcy proceedings. 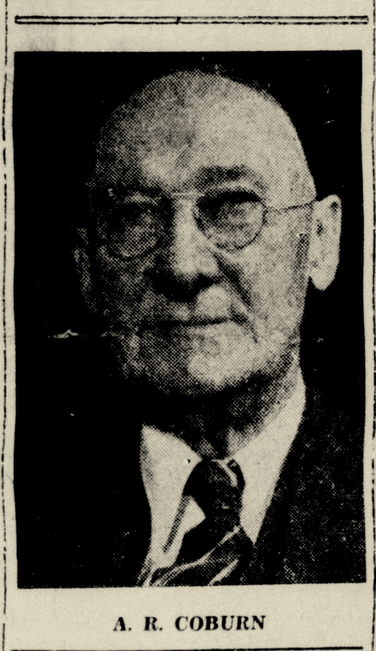 Chillicothe Constitution-Tribune Oct. 5, 1942
​Montgomery Wards took a long-term lease on the building in the fall of 1928. Remodeling work began with Kansas City firm B.L. Hoffman Construction Company doing the work. The store, complete with tire shop, opened Dec. 1, 1928. It is claimed that on opening day, over 18,000 people came through their doors. The first and second floors along with half of the basement, were used as sales floor space. The third floor was used for storage. Two other cities were vying for this store but Chillicothe won out due to the railroad facilities and highways. In 1975, Wards, who had occupied this building for nearly 50 years, vacated the premises.
​    In 1915, the new Adams Automobile & Supply Company was built here, tearing down the previous structure. ​Adams had a car shop across the street since 1911, but was ready to expand and go big! He placed the showroom on the second floor. A repair shop was placed on the top floor. There was a large lift elevator in the rear of the building to move automobles up and down.
​    C. F. “Frank” Adams was born in 1863, in Wallingford, Vermont, the son of Charles A Adams and Elizabeth (Peabody) Adams. His family moved to Livingston County when Frank was a small boy. He attended Oakdale and Adams Schools in Rich Hill Township.  When he reached 16 years of age he quit school to help his father on the family farm.

Frank and his father established the Adams & Son Creamery which included national and international sales of products such as butter. In fact, Queen Victoria of Great Britain thought so highly of their butter that she awarded the Creamery a medal in recognition of “excellence” of that product.

In 1881, Frank left the farm and moved to Browning, Missouri where he worked in the mercantile business. Four years later he moved to Chillicothe where he established the Adams & Sons Wholesale Grocery which quickly became one of the largest wholesale grocers in this part of Missouri.

He was a representative for the Dodge Brothers Automobile Company, erecting the three story brick building at South Locust Street in 1915-16. This building functioned as both a showroom and repair shop.

In 1888, he married Mary Jones (in Chillicothe) and they had six children; Alice, Forest, Mildred, Charles Jr., George and Dorothy.

Adams served his community in many ways. He was Chillicothe Mayor from 1907 to 1909. He served on the board for Public Works for a number of years. While President of Chillicothe Municipal Utilities, he made sure that Chillicothe had one of the best equipped municipal plants in Missouri and adjoining states. He was also president of three highway associations and helped dub Chillicothe “The Highway City.”

His involvement with the highway associations was instrumental in helping form the Pike’s Peak Ocean to Ocean Highway, which connected New York to San Francisco. (Route 36 roughly follows the same path).  He served as its first president for 9 years from 1911 – 1920.  Then he was elected a life member of the advisory committee of the association.
​
Frank Adams died from pneumonia on January 30, 1933, and is buried in Edgewood Cemetery, Chillicothe, MO.

Horses in front of the Platter's stable in "State of Missouri" 1904. Note the Marcum House to the right where the present Library building now stands. Book in the Click on the picture to see a short video made by Main Street Chillicothe in collaboration with the Livingston County Library archives.
​
​    The building before Adams Automobile & Supply Company / Wards / 55 and Go & Threads, was purchased by Andrew Platter in 1864 to start his livery/stable business. His sons Frank and William (Bill) eventually took over the business. It is said that Bill’s “word controlled the prices of horses in St. Louis for many years.” The Platter brothers “established probably the largest original supply depot for horses and mules in the world.” Above the stable, was a large community gathering place. This was also one of the first “opera houses” and early dance halls in Chillicothe. The Platters were able to attract top billed performers to their facility. In about 1868, Nelson Kneass (Ben Bolt song composer) held his last performance at the Platter “opera house;” he died in 1869 at the Browning House (now Hometown Pharmacy) at the corner of Jackson and Locust Streets; it is not clear if he performed immediately before his death or not. The crowds for Kneass' performances were noted as being larger than usual.
Grace Episcopal Church met in this upstairs area in 1869 until their building was ready. They claimed it “lacked a congenial atmosphere.” The Platters were early members of that church.
In 1908, Frank Platter left the livery business for greener pastures in Texas. 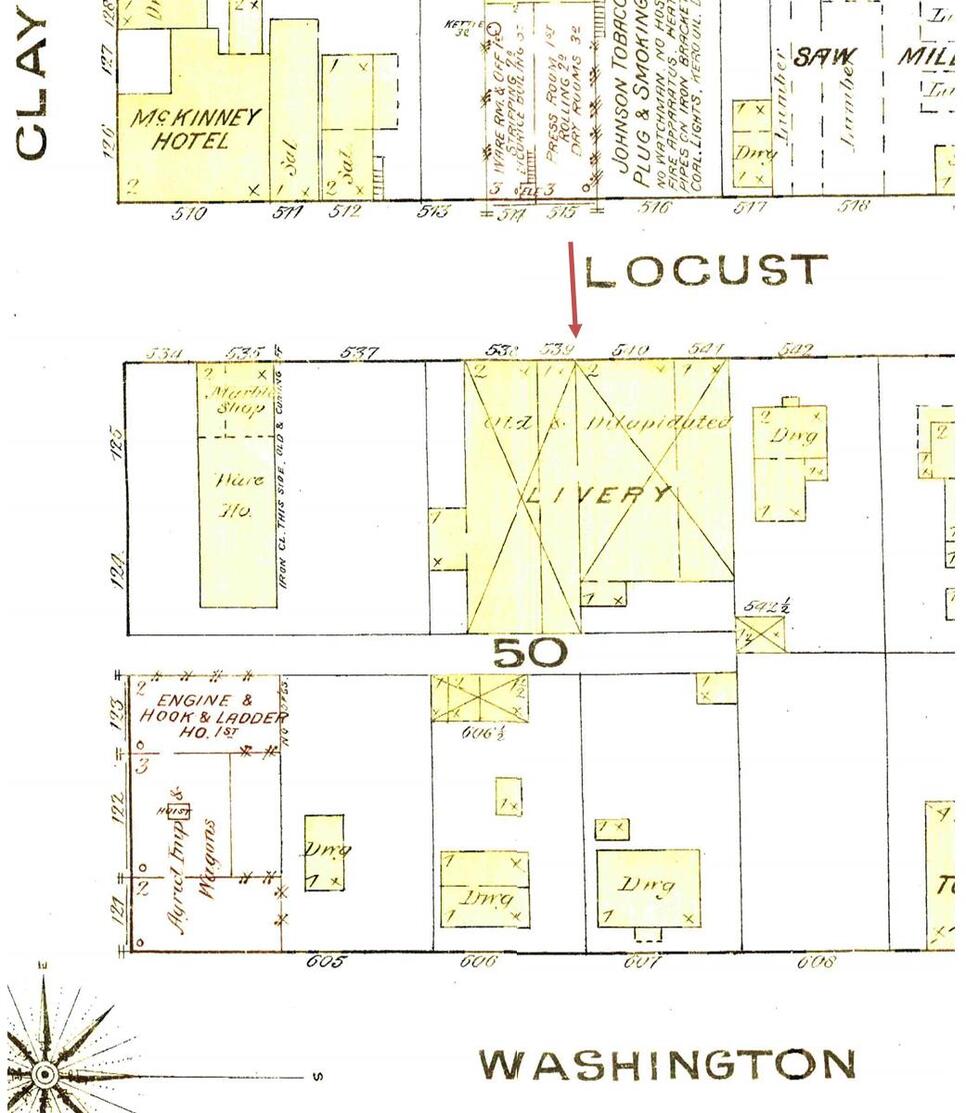 The 1885 Sanborn map shows this as 538-541 Locust Street.
Not many buildings are included on the 1878 Atlas maps, but the Platter Brothers Livery & Sales Stable is featured. 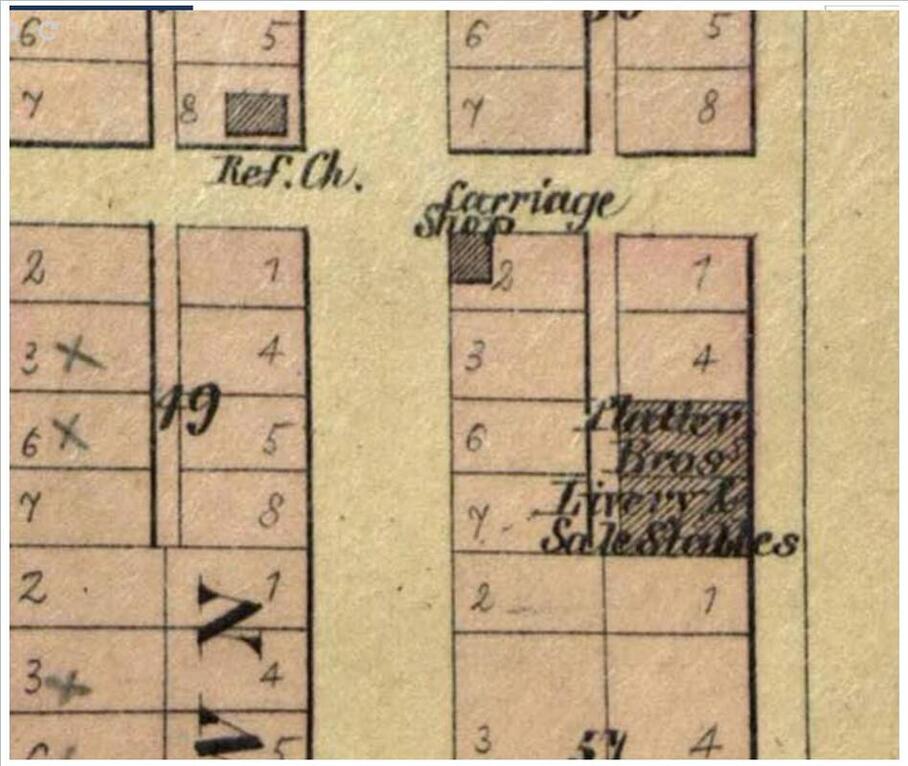 portion of a map from the Illustrated Historical Atlas of Livingston County, Missouri, 1878.