715 Washington Street
This is the third City Hall building to stand on this very spot, dating back to 1869. City Hall once housed police and fire departments as well as theatres and an opera house!
next building - leeper hotel
previous building - ben bolt
home page - Tour and discover 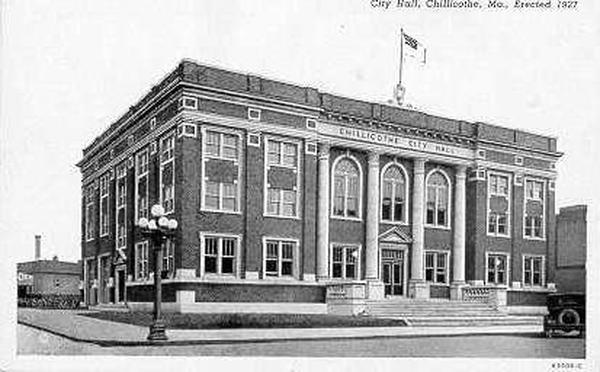 The new City Hall c.1927, source unknown; on file at the Livingston County Library archives.
​    This lovely City Hall building was designed by architectural firm Bonsack and Pearce of St. Louis in 1925-26. It was built by contractor S.E. Shultz, who also put up the new First Christian Church at the same time. The cornerstone was placed May 6, 1927, with dedication ceremonies following that evening. The current City Hall replaced an older one that burned down on Sunday, May 17, 1925. The first City Hall from 1869, also located in this spot, burned down in 1876. Our City Hall is a contributing structure to the Courthouse Square Historic District on the National Register of Historic Places.

For a brief time around 1930, the Darlene Rose Theatre ran in the City Hall Auditorium. 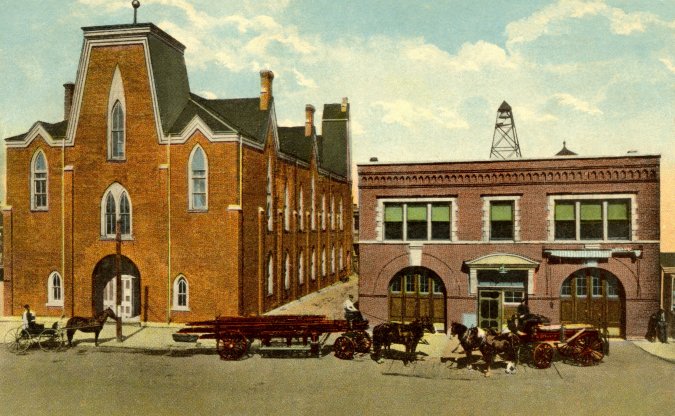 City Hall and fire department after 1906. Source unknown; on file at the Livingston County Library archives.
Taken after about 1906, the picture above shows the former City Hall with Fire Department next door. It was built in 1877, to replace yet another City hall that burned in 1876. This new building was placed on the same site, with a second floor “public hall” that could seat 500. The City employed  architect Charles B. Clarke of St. Louis to design this building. (Mr. Clarke was the same architect that built the Central School in 1875 at Elm and Ann Streets in Chillicothe, MO.) 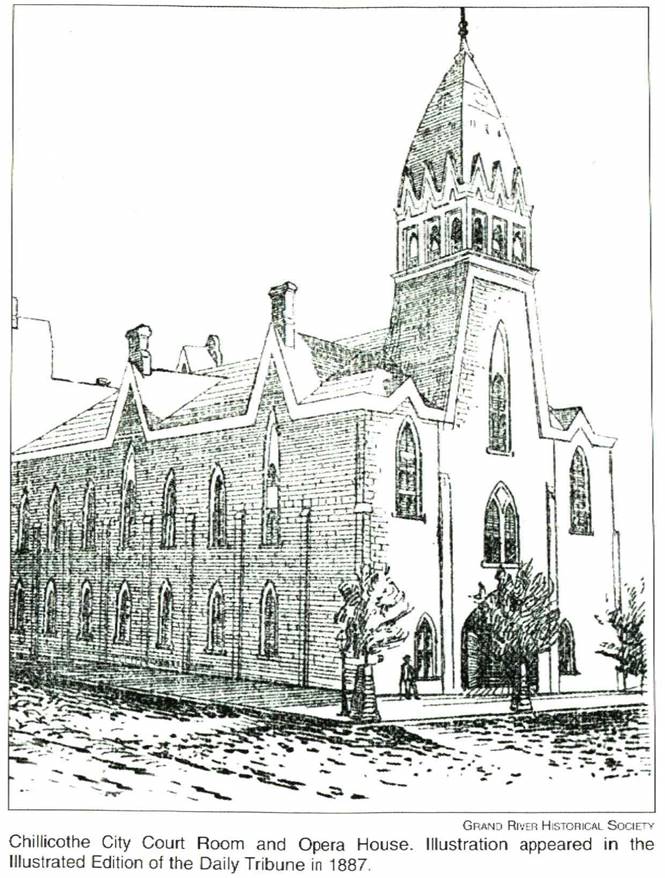 Originally this (1877) City Hall Opera House had “a tall tower at the west front, with the top of the tower terminating in a domed effect with slate roof laid in fancy patterns and in various colors. There was a look-out about half-way up the tower, as there was on the front of the new Central School building.”  The upper portion of the tower on the City Hall building was removed in about 1906.

The City Hall Opera House was used for all kinds of public entertainment and community gatherings. The majority of the dances were held at the City Hall as well as local groups putting on plays, musicals, and talent shows. The comedic team of Kennedy, Williams and Magee performed here one night in 1889. In 1895 Governor Bob Taylor of Tennessee came to the Chillicothe opera house to lecture on “The Fiddle and the Bow,” things he knew and had seen. Former Senator John J. Ingalls of Kansas also came to lecture here in 1895 on “Paternalism in Government.” Perhaps the greatest performer ever credited to come to City Hall was Madame Francesca Janauscheck, a famous Bohemian tragedy actress well-known in both the United States and Europe. She performed for one night only in the City Hall Opera House in the early 1880s. ​In 1887 there was a huge "trades carnival" held in the City Hall with local merchants set up around the building. It was said that over 1000 people attended that event. 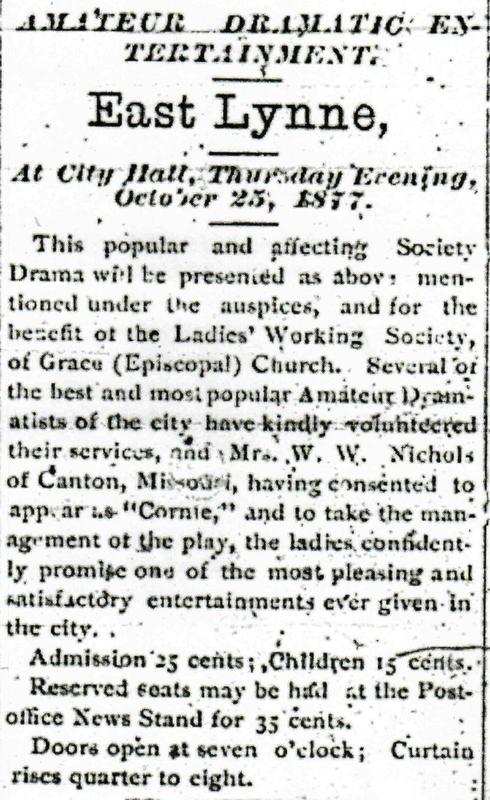 From the "Chillicothe Crisis" newspaper October 18, 1877 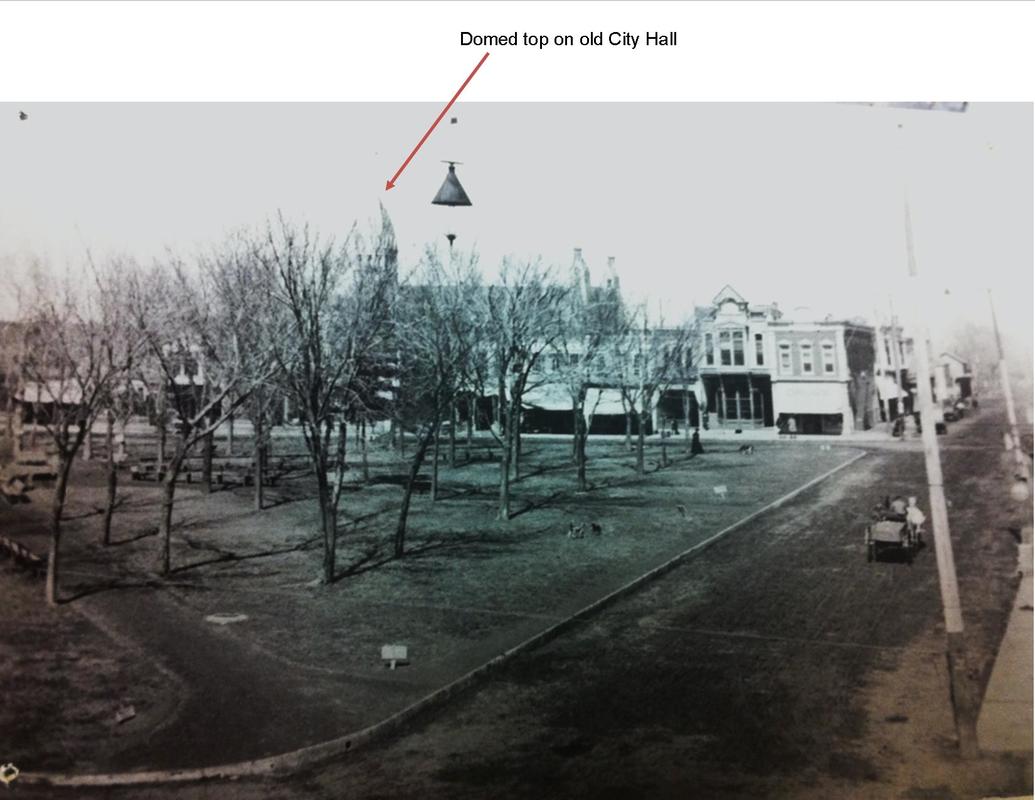 Photo courtesy of the Grand River Historical Society & Museum.
The picture above of the Square (area around the Court House/Elm Park) held a surprise feature - in the background looms the old 1877 City Hall building WITH its domed top! This picture is before 1906 when the dome was removed. 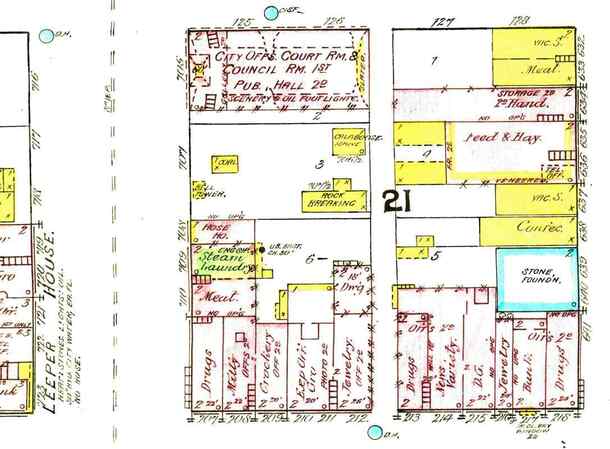 1890 Sanborn Map
Originally, the first City Hall was built in this same location in 1869 when Chillicothe created a city charter. That is also the first time we had a mayor. The City was incorporated in 1855.
Next building - leeper hotel
Previous Building - ben bolt
HOME PAGE - TOUR AND DISCOVER