517 Elm Street
This was originally built as the Elks Lodge in 1910. Socrates England's home and blacksmith shop once stood in this spot. 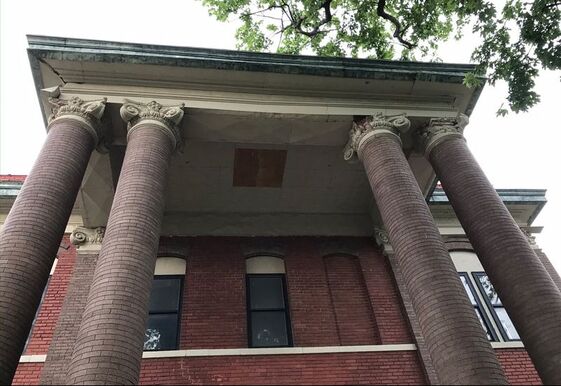 Picture courtesy of Kirsten Mouton, 2020.
Next building - new york store
previous building - wallbrunn building
home page - tour and discover
In the 1960s up through 2003 these were called the Hillcrest Apartments. As of 2004 the building has been vacant.
The Brennans sold the building in 1943 to Mr. and Mrs. Homer Peet and Mr. and Mrs. Don Higgins of the firm Peet and Wiggins. The building became known as the "Wiggins Apartments."  By 1947 there were a number of tenants in the building.

Chillicothe Constitution-Tribune November 15, 1943
In 1940 only Dr. R.J. Brennan is listed at the address.
By 1930 the Elks were struggling to keep up membership and the country was in a deep depression. The building fell into foreclosure, with the sheriff selling the building on January 17, 1931. Dr. A.J. Simpson and Forrest Gill bought it as there were liens on the property and they had some financial obligations with the building as sureties. Neither seemed to want the building nor have any plans for it. In fact, within a matter of a less than two weeks they had sold the building to Dr. R. J. Brennan. His plan was to convert the building in to office space. By April of 1931 he was renting apartments in the "Brennan Apartments." The first floor housed Brennan’s office as well as three apartments while the second floor held another six apartments. All of the units were furnished. There was also a barber shop on the Jackson Street side, run by John Barnes.

c.1917 flag-raising event at the Elks Lodge on Jackson and Elm Streets. Photo courtesy of the Grand River Museum & Historical Society.
​    The beautiful Elks building was started in 1909, but due to a harsh winter, they were delayed in finishing it until early 1910. The Elks had been renting rooms in the Wallbrunn building (J.C. Penneys) but their lease expired December 31, 1909 and Maupin College was scheduled to move in. The Elks removed their furnishings and placed them in the basement of their new building while it was still being finished. Their first meeting was held on January 22, 1910 but the building was still not quite complete. The building cost $20,000 to complete. 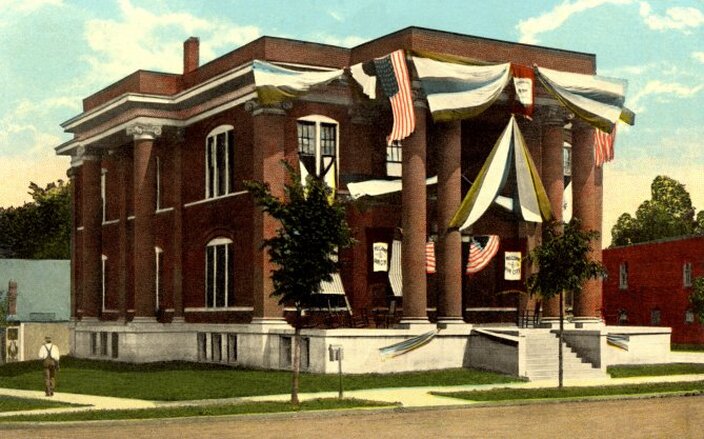 Elks Lodge c.1911. Picture on file at the Livingston County Library Archives
The grand opening “Fair” for the public was held on February 1, 1910, and the following five nights. Included in their new building was a department store where most items being sold had been donated; there was also a cafe. (I assume the department store was only for the grand opening.) The lodge program room was on the second floor. For their opening week, they had different performances upstairs each evening. “Season tickets” for all five nights were being sold for a whopping sum of 50 cents.
​ 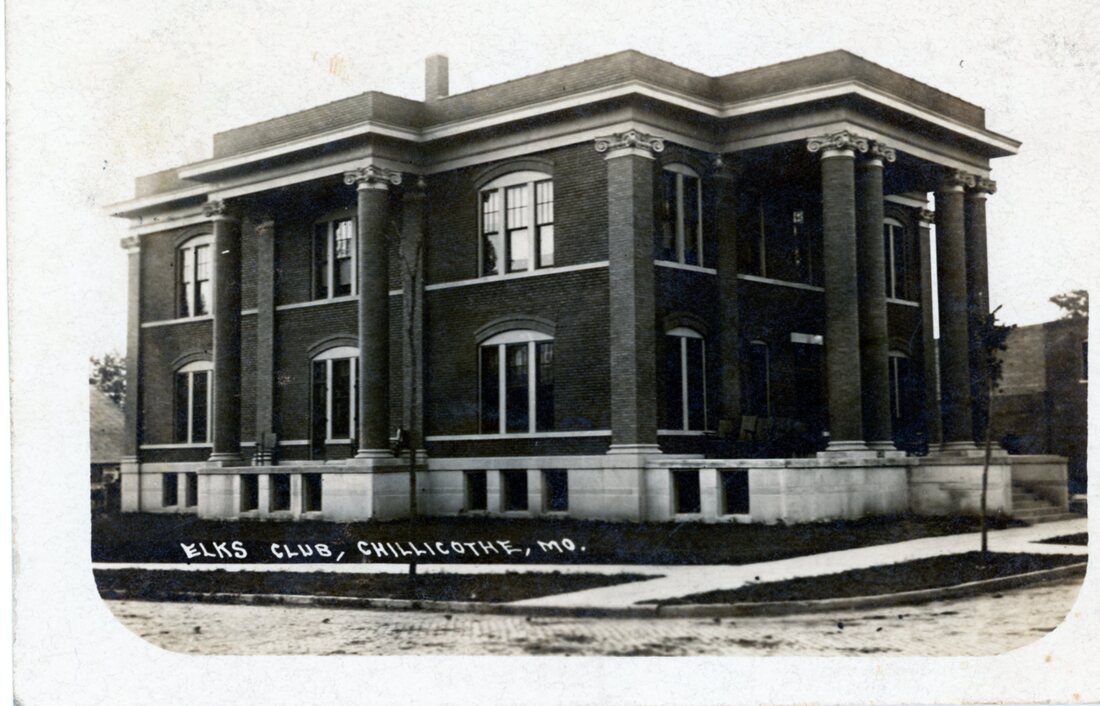 c.1911 Postcard in the Livingston County Library Archives
​Prior to the Elks building, this lot housed England’s Blacksmith Shop. Socrates England was born in Kentucky in 1833 and grew up there, learning the trades of blacksmithing and wagon making. He married Elizabeth Ann Smith in 1855 and they headed west the same day as their wedding. They came to Missouri in 1858, moving to Chillicothe in 1863. After a very brief stint in Indiana, the couple returned to Chillicothe in 1865. They had three sons and two daughters born to them. Elizabeth died in 1916 in their home at 323 Webster Street.
Socrates set up a blacksmith shop at 516 Jackson and worked there until he retired in 1907. His shop was located at the back part of where the old Elks lodge is now, with a two-story store room on the north side. His home in 1899 was at 515 Elm Street which puts it in the lot just south of the Elks lodge building.
Socrates was a member of the Chillicothe Board of Education, serving several terms. In the 1870s he served as a councilman for the Fourth Ward. He was also a member of the Odd Fellows for over fifty years, joining March 24, 1855; that made him the second oldest Odd Fellow in the United States. He had all the degrees and twice served as Noble Grand. He was also a Mason for over 50 years, joining the Chillicothe Lodge July 17, 1867. He was elected Worshipful Master in 1870. He was also a member of the Methodist Episcopal Church South. Socrates died in 1920 at his home at 323 Webster Street and is buried at Edgewood Cemetery. 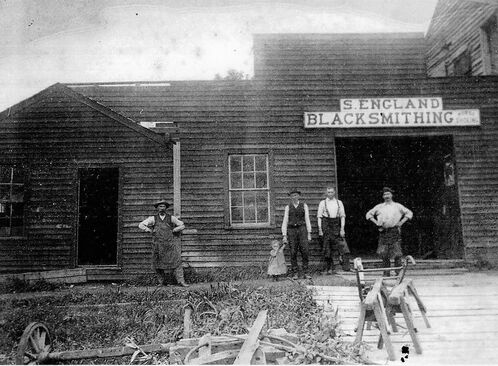 England Blacksmith Shop at Elm and Jackson Streets, prior to 1907. Photo from the Livingston County Library archives. 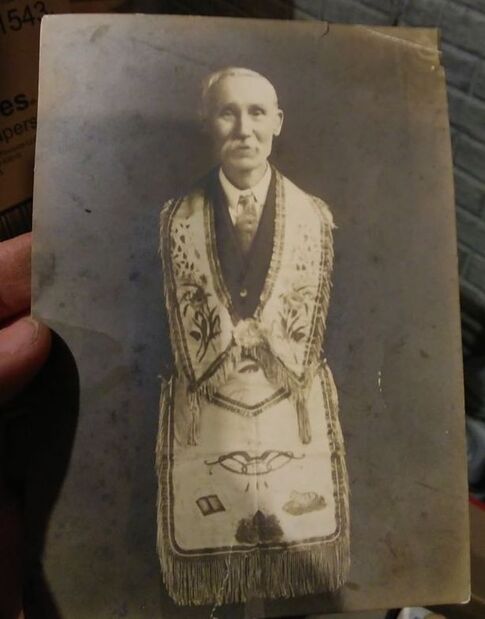 Socrates England. Photo courtesy of his great-great grandson, Derrick Ramsey. Socrates is shon in his collar and apron he purchased in 1857 of white satin with hand-painted emblems. This was a highly prized possession.
next building - new york store
previous building - wallbrunn building
home page - tour and discover