450 Locust Street
The Livingston County Library moved into this building in 1965. It was constructed as a post office and federal building. Previously there was a wood-frame hotel located here. ​This is a contributing building for the National Register Chillicothe Historic Commercial District. 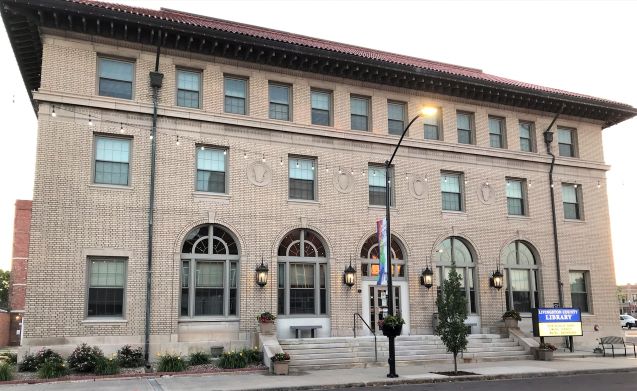 Picture courtesy of Kirsten Mouton, 2020.
next building - luella grand theatre
previous building - Adams automobile & supply company
HOME PAGE - TOUR AND DISCOVER
In 2016 the Library celebrated 50 years in the building and the building turned 100 years old. From 1965 until about 1975, the Library rented space on its second floor to the Grand River Museum and its third floor to the University of Missouri Extension Center. After that time, the second floor was used for additional library space. The Library placed a genealogy research room on the second floor, as well as a special archive room, the Smithson meeting room, and used the spacious court room for large programs and meetings. The third floor remained rented to the Extension Center until about 2000. After that time, the Library expanded to fill all the space in the building.

​    In 2008-2009 the Library did a comprehensive renovation to the building, fixing things from top to bottom. There was need for new sewage pipes in the basement. The courtroom wall covering was in need of being replaced. Stairs were moved. Bathrooms were updated. It was a huge overhaul but has helped to maintain this historic structure. 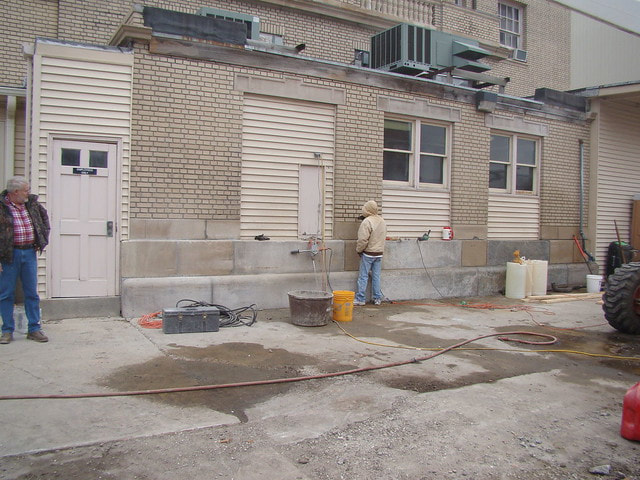 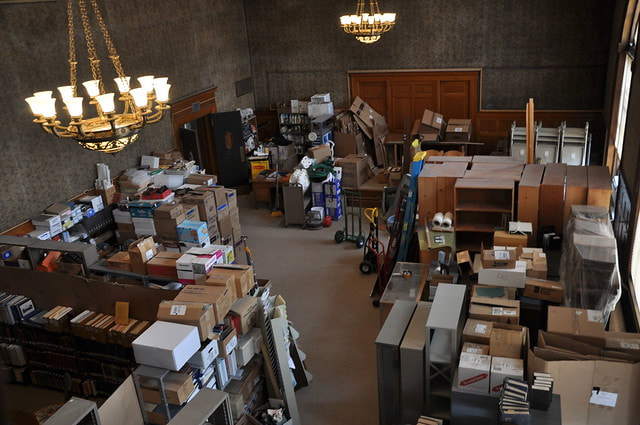 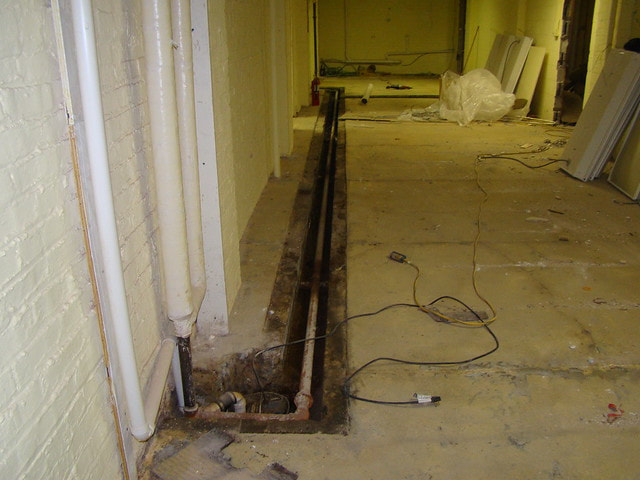 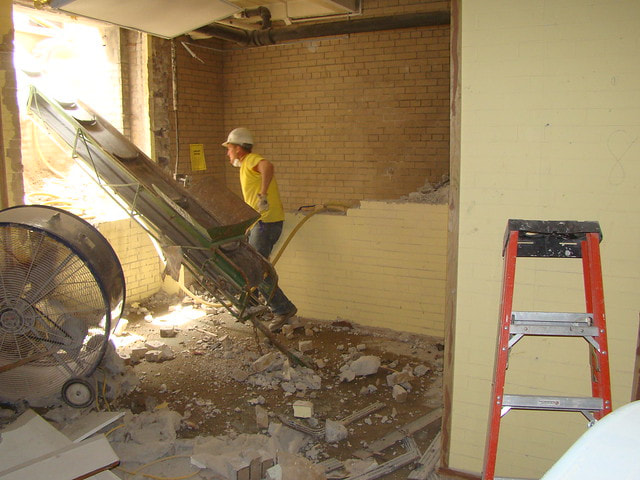 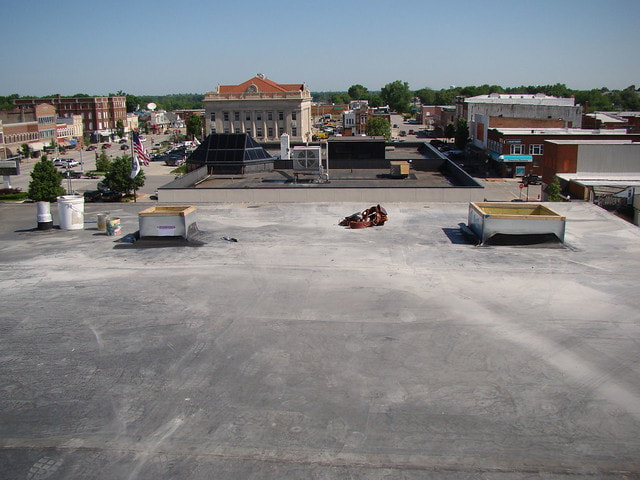 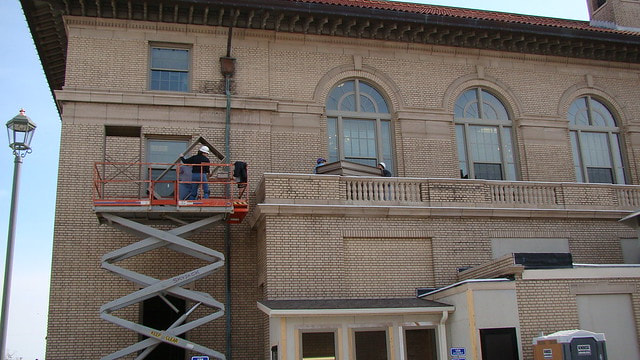 If you hover over the picture with your cursor, you should get the caption. All of these were taken in 2009 as the Library did a huge renovation.
​In 1970, Lillian DesMarias came on as the Library Director. In the mid-1970s she added the ramp on the north side and an elevator. She also transformed the basement from a boiler room and storage area into a children’s department. The story goes that the then-State Librarian told her it was impossible to turn the basement into useful space for children. Lillian did just that, even doing some of the brick work herself! She made quite an impact in her ten years here.
In 1965, the post office decided to vacate its building of 50 years in favor of a new one. George Somerville, a founder and first President of the Grand River Historical Society & Museum from 1954 to 1965, who also served on the Library Board of Trustees, heard about the vacancy and realized this building would make a wonderful and much expanded library. It took a lot of work, but a dedicated team made it happen. 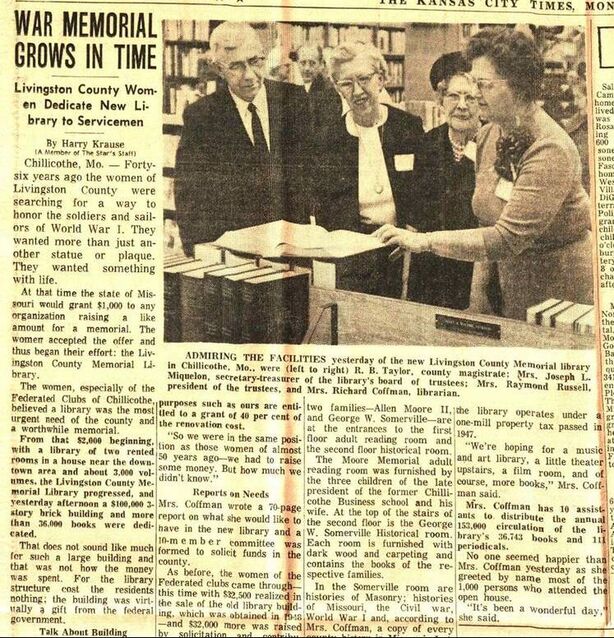 Kansas City Times, Nov. 14, 1966
​On Mar 24, 1965, the deed of ownership, along with some furniture, changed from the federal post office to the Livingston County Memorial Library; technically it went into the name of Mrs. Raymond (Grace) Russell, the Library Board President. The Library was remodeled and opened with a big dedication on Nov. 13, 1966. The building was “sold” for $100,000, but if the Library kept to the stipulations over a 20 year period, the cost was reduced each year until only $1 was due at the end.
​Mrs. Raymond (Grace) Russell was an important force in the early life of the Library. She was Secretary of the Livingston County Regional Library Association from 1924 to 1926 and 1929-1930 then President from 1930 to 1968 when she retired. 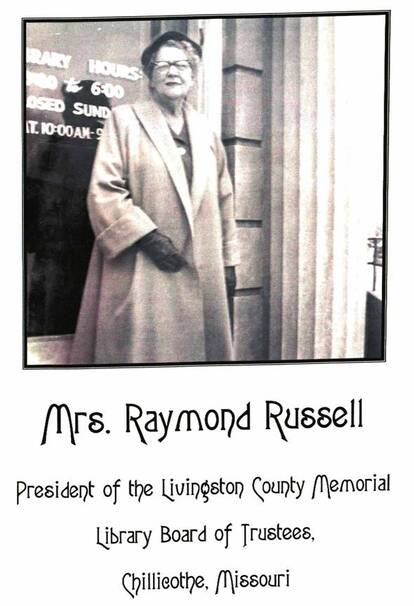 Mrs. Raymond (Grace) Russell in front of the Libary building at the corner of Washington and Jackson Streets prior to moving to the Federal building. The Library was at this location from 1948 until 1966.
During the post office’s time here, they rented space to various agencies and groups. In 1964 the first floor housed the Post Office, American Red Cross Livingston County Chapter, US Internal Revenue Service, and the US Selective Service Local Board. The second floor had the US Housing & Home Finance Agency, US Social Security Administration, and the USDA Soil Conservation. The third floor had the State University of Missouri Extension Center.In 1940, the Livingston County Agricultural Extension Service, US Department of Agriculture, State Highway, US Internal Revenue Department, and US Navy & Army Recruiting all had offices in the federal building. ​ 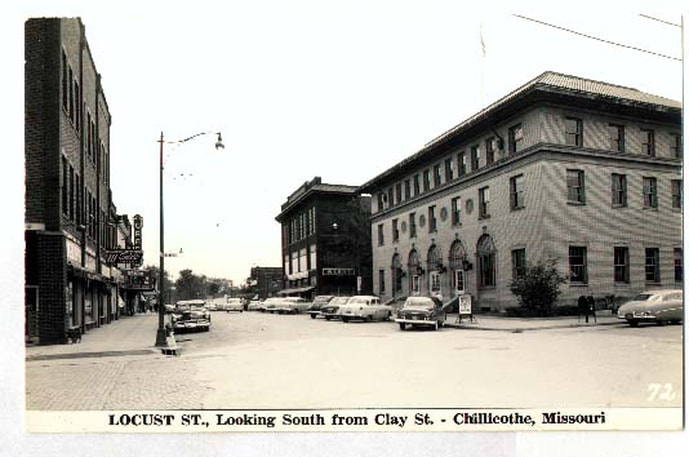 Looking south down Locust at Clay Street. Source unknown but on file at the Livingston County Library archives.
​    ​During World War I (United States involvement April 6, 1917 to Nov. 11, 1918) the  local American Red Cross chapter was looking for a larger location to make bandages, hospital garments and surgical dressings. By the end of May, 1917, Mr. John Taylor, the postmaster, was authorized to designate all of the second floor and two rooms on the third floor exclusively for Red Cross use. The vault on the second floor (now part of the Archive Room) was used to store supplies. Night classes were held in the Federal building to train workers how to make the required materials to set standards. Before the end of the war, it seems that a good portion of the Federal building was taken over by the Red Cross. In 1918, the Red Cross Livingston County Chapter had a booth at the annual North Missouri Farm Congress and won several prizes for best exhibit of supplies; these red and blue ribbons were to be permanently displayed in the local rooms of the Federal building. Over the years, sadly, those were lost. 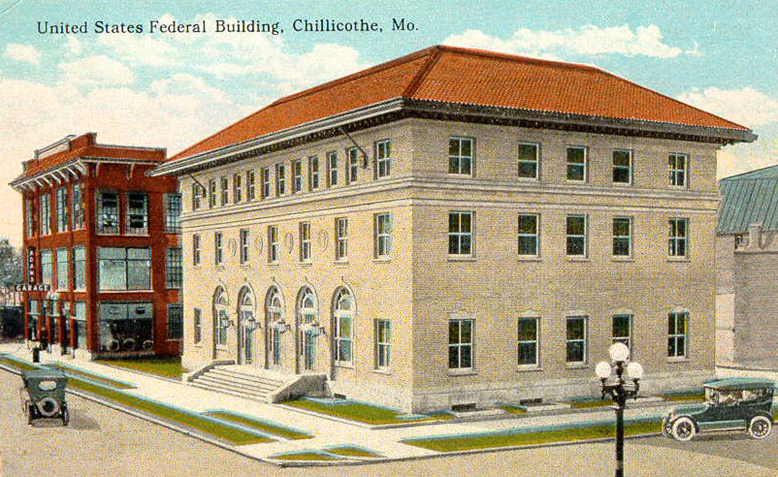 The Federal building c. 1920. On file at the Livingston County Library archives.
In 1915 several buildings at the corner of Locust and Clay Streets were demolished to make way for a new federal building. Congress appropriated $130,000 to complete the work. Starting in July of 1915, under the supervision of architect E. A. Brown from Kansas City, W. H. Fissell of New York began putting supplies on the property. By mid-August the basement was being excavated.
Local Meinershagen Furniture Company, completed a “shade contract” by October 1916. Interior work was nearly complete by this time. The post office was ready to move in as soon as the furniture was installed, which was expected to be done shortly.
​    Due to a glitch with the furniture arriving, the grand opening of the post office did not occur until March of 1917. J. H. Taylor was the postmaster, with Pres Randolph the Assistant Postmaster. The basement, first and third floors were for postal use, with the second floor reserved to hold federal court. The exterior was built of brick with Bedford stone trim. The basement held a coal and boiler room, storage vaults, and spacious restroom facilities, including athletic equipment and baths for both male and female employees. The first floor was the main interface with the public, containing the “letter boxes” and was where the majority of mail handling took place. The postmaster’s office along with several other employees were supposedly on the second floor, but there is an old photograph which clearly shows the postmaster’s office on the first floor. There were also hidden catwalks for postal inspectors to secretly view worker productivity. The post office had previously been at the Loomis Building on Washington Street.
​The 1909 Sanborn map shows a series of smaller buildings here, including a lunch counter, barber, and several vacant structures with the notation “to be removed.” 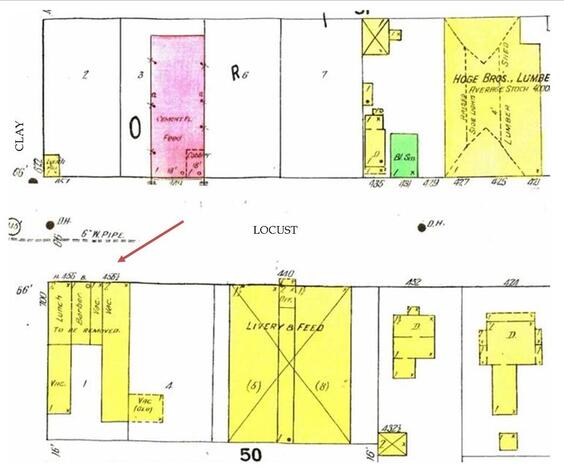 1909 Sanborn map
The 1901 Sanborn map shows a saloon and a barber shop, neither of which are listed in the 1899/1900 city directory. The L.E. Fullerton Feed store was in this general location as well, but is also not included in that city directory. Fullerton built a new store around 1912 across the street which later became the home of the Empire/Grand Theatre. 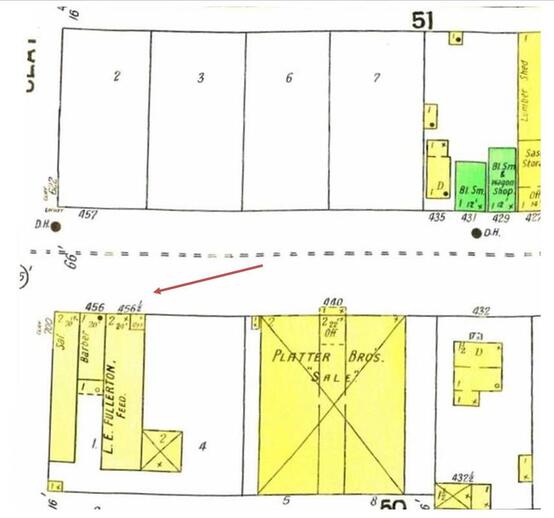 1901 Sanborn map
The Marcum House, a hotel, was shown on the corner on the 1896 and 1890 Sanborn map. It was in other locations before and after these dates. Looking at the old newspaper notices, it seems to show up on south Locust in November of 1890. 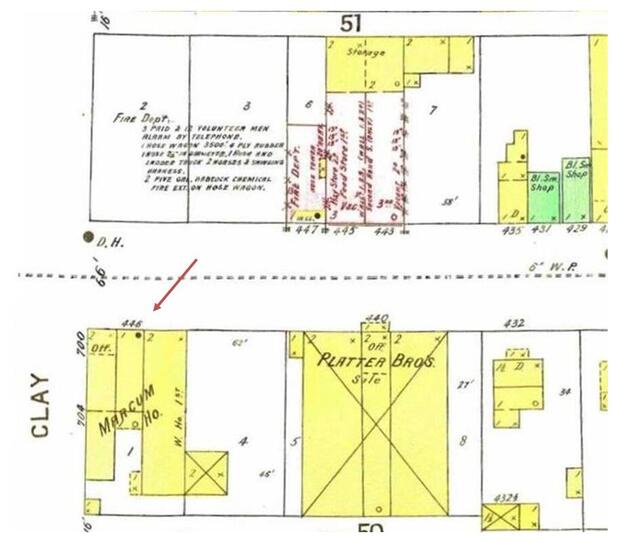 1896 Sanborn map
The 1890 Sanborn map showed a second-hand store, barber, Marcum House with an office and a flour & feed store, and warehouse. It is most likely that the mule corral immediately south was part of the Platter livery and sale barn. The 1899/1900 city directory shows that a saloon was here as well, Coon & Welsh. 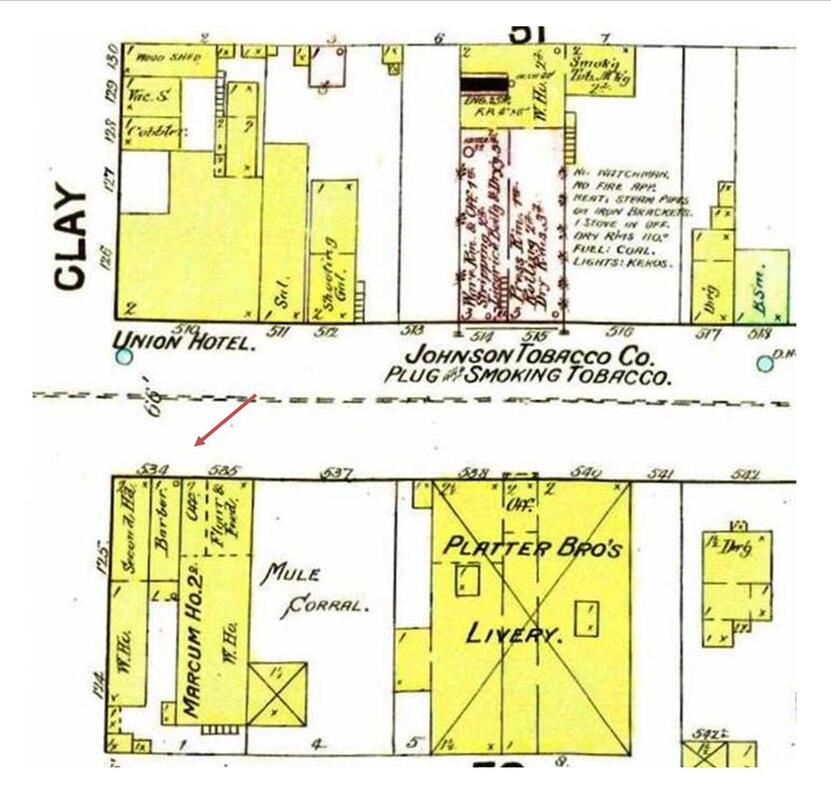 1890 Sanborn map
In 1885 the Sanborn map shows this location as a small marble shop with a warehouse in back. 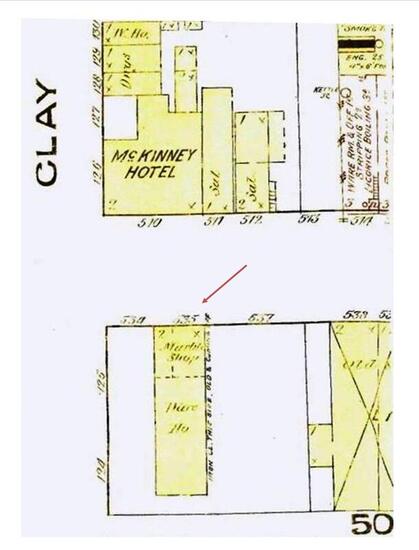