701 Locust Street
This building looks substantially the same as its 1907 remodel for the First National Bank. Shops were located here back at least as far as 1870. 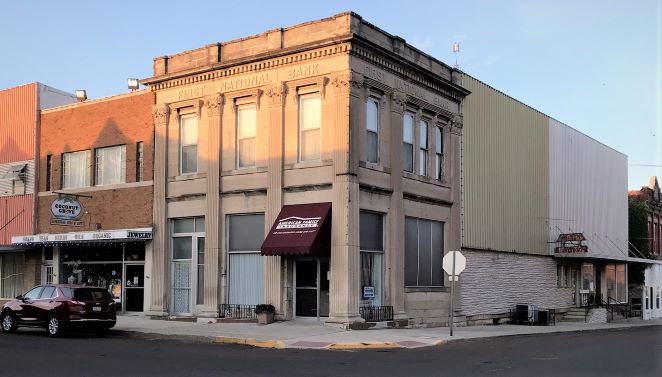 Photo courtesy of Kirsten Mouton, 2020.
next building - wallbrunn building
previous building - courthouse
HOME PAGE - TOUR AND DISCOVER
The First National Bank extensively remodeled an existing building and opened on Feb. 20, 1907. (The bank operated in Chillicothe at 703 Webster immediately prior to this.) They moved out by 1932 and the property was vacant. In 1936 Walton Mortgage Company had an office upstairs. Cut Rate Market occupied the downstairs briefly in 1937. Slater’s Food Market was here from 1939 to 1969. In 1970, Slater sold his business to Mr. and Mrs. Bob Gipe and it became Gipe’s Market. From 1975 to 2006 it was home to various law offices. In 2007 it was Alternative Health Service and by 2013 American Family Insurance had an office here. The building is still owned by the Slater family.
​
The upstairs was utilized for a variety of purposes over time including dental, medical, insurance, real estate, attorneys, and a even a hobby shop. In 1970 the upper area was completely vacant, but new renters came in by 1975. It appears the upstairs was no longer used by 1990 as the rooms are listed in the city directories as vacant and by 2000 the designation of 701 ½ is not listed anymore.

This building is a contributing building to the Courthouse Square Historic District on the National Register of Historic Places. 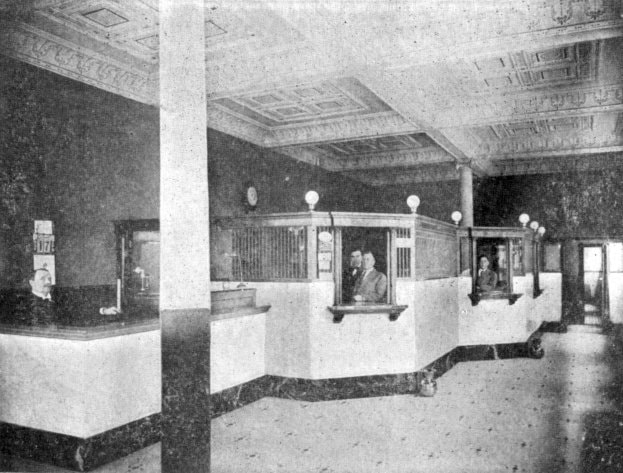 Interior of First National Bank. Unknown source on file at the Livingston County Library archives.
​        First National Bank bought the building from Stewart and Burch, owners of the Fair Store dry goods, in 1906. It is not clear how long the Fair Store occupied the building; one ad shows this store at “south Locust street” in 1890. (The online newspaper archive, however, only goes back to 1889.) The earliest Sanborn map of 1885 shows two buildings on the lot that may have been joined into one long building by 1890. We do not have any city directories that go back this far, but the map shows a crockery, china and glassware warehouse located here with the smaller building looking more like a shed or storage area.

Back into the 1870s, this building/location served as a one of the largest grocery and meat markets in town, owned by Henry Kase (source: Mabel Jones Bryan 1951).​

On the 1885 Sanborn Map the address was 647 Locust Street, at the corner with Webster.
Next Building - wallbrunn building
previous building - courthouse
HOME PAGE - TOUR AND DISCOVER