445 Locust Street
The first known building here was put up by the fire department in 1896. After burning down, another structure was erected in 1917 by John E. Meek. The upper floors of this building burned in 1927. The building was again occupied, minus the upper floors, by Bryan then Bailey Seed companies. Chuck's Pet'n Garden Center bought them out in 1959. In 1990 it changed hands to Green Hills Lawn Care. Since about 2013 is has been in private ownership for personal use. 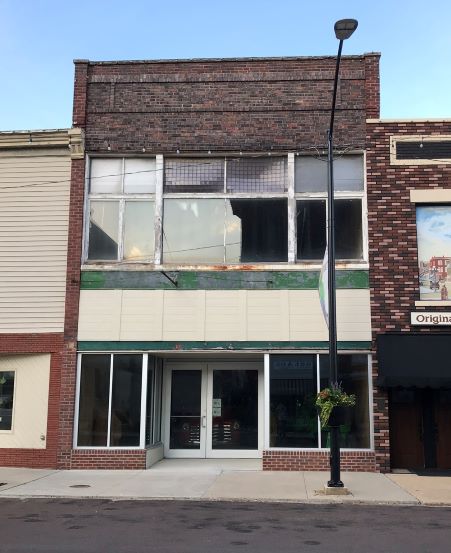 Picture courtesy of Kirsten Mouton, 2020.
next building - edwards cafe
previous building - empire theatre
HOME PAGE - TOUR AND DISCOVER
The current owner of Moore Construction next door enjoys this space for personal use.
On March 1, 2008 Jeff and Shelley Staton bought Green Hills Lawn Care from Ed and Ann Martens. Between 2009 and 2013 ownership of the building had changed to a Bailey relative and was in the process of being sold to the owner of Moore Construction.
Chuck Fleener sold his Chuck's Pet and Garden Center and Lawn Care Service in November of 1990 to Ed Martens and Chuck's Pest Control to Gary Frazier. Martens ran lawn care company previously and changed the Chuck name to Green Hills Lawn Care. They continued to sell pets and pet supplies as well as garden and lawn care products. In 1996 Martens added a nursery in the now vacant lot at 429 Locust Street. They moved out around 2013. Shortly thereafter the building was sold to the current owner and remodeled for personal use.
In late November of 1989 the Chillicothe Shirt & Cap Shop clothing store appeared in Chuck's Pet N' Garden Center, run by Charley Evilsizer.
The location was occupied by Chuck’s Pet’n Garden Center starting in 1959. Chuck Fleener had become a partner (as well as a brother-in-law) in the Bailey Seed business. In April of 1959, F.R. Bailey Jr. sold his part of the business to Chuck in order to pursue a career in photography. (FR and his wife Jo were legends in the photography world in these parts. But that's another story.) In 1970 Chuck added a pest control service which became half of their workload.
Bailey Seed Company shows up in the old newspapers late in 1929 and it is likely that is when they moved into the 445 Locust Street shop. The name Bailey Seed remained through the mid-1960s.
​ Later in 1927, Bryan Seed Company moved in, first offering storage, then garden products. Bryan Seed was gone by late 1929.
​
The lot appears to have been empty until J. E. Meek had a building erected here in 1917 for his hardware and furniture business. The first and second floors were used for showrooms the third and fourth floors for storage. A raised landing was constructed in the back of the first floor for an office space as well as to showcase more goods. Meek even installed an electric elevator, making the moving of furniture between floors much easier work. He remained in this location until a big fire burned his stock on the upper two floors in late July 1927. The cause of the fire was believed to be spontaneous combustion. Meek relocated his shop and never seems to have returned to this spot. (Somehow, at that point, Meek didn’t own the building; a Mrs. Williamson from Illinois did.)
John Meek III and his wife lived at 205 Locust Street, at the corner of Locust and Second Streets. Meek's father, Bazel J. Meek, had purchased the home in 1923 and remodeled it. The home was sold to Safeway in 1958; both this home and the Walbrunn-Jenkins-Bailey home at the corner of Locust and Third Streets were torn down to make way for the new Safeway store. Later this became the Savage Grocery store and then in about 2014 the North Missouri Center for Youth and Families. 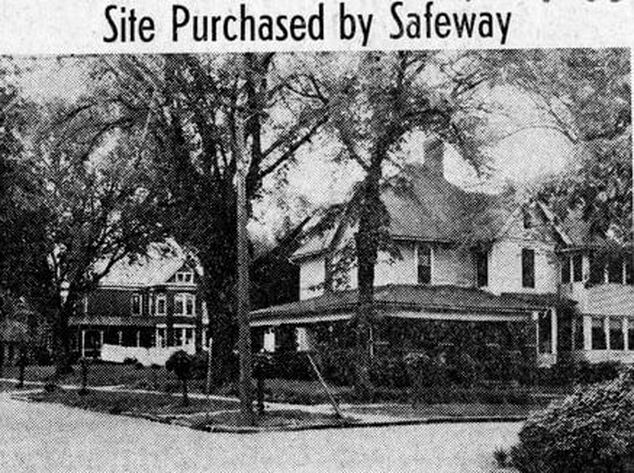 John Meek's home at 205 Locust Street in 1958 to the right side of the picture. The former Wallbrunn-Jenkins-Bailey home is visible in the distant right side. Chillicothe Constitution-Tribune May 28, 1958
Thomas McNally built a new fire house at about 445 Locust Street sometime between 1890 and 1896. This was the first known building on this lot. It burned down soon after and by 1899 the fire station had moved next door to the City Hall.
previous building - empire theatre
next building - edwards cafe
HOME PAGE - TOUR AND DISCOVER