500 Washington Street
The Ritz theatre started out as a Masonic temple built in 1895 at the northwest corner of Clay and Washington Streets. The Masons leased space to lots of local businesses and even the courthouse. Originally a church was on this site: Christian Church built in 1857. 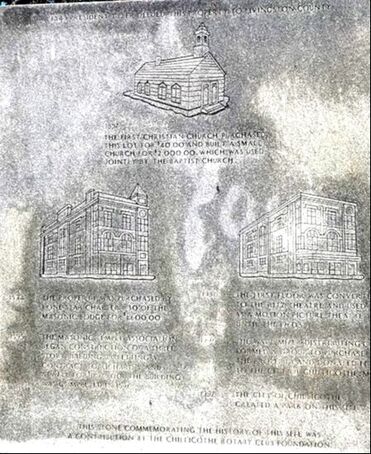 Close-up of the Rotary monument. Picture courtesy of Kirsten Mouton.
This once grand building was described as an “eyesore” and “violator of city codes” starting in the 1980s. A group of concerned citizens finally bought the derelict property from the out-of-state owner in 1996, under the business entity of Watt-Mizer Distributing. The plan was to tear down the derelict structure and donate the lot to the City. L.H. Hinnen of Hinnen Construction, hired to tear down the building, said that “most of the wood in the building is rotted.” The property was donated to the City, and they created a park on the corner lot. Rotary placed a wonderful plaque there, telling of the history of the lot from the original church, to the Masonic temple, to the Ritz. 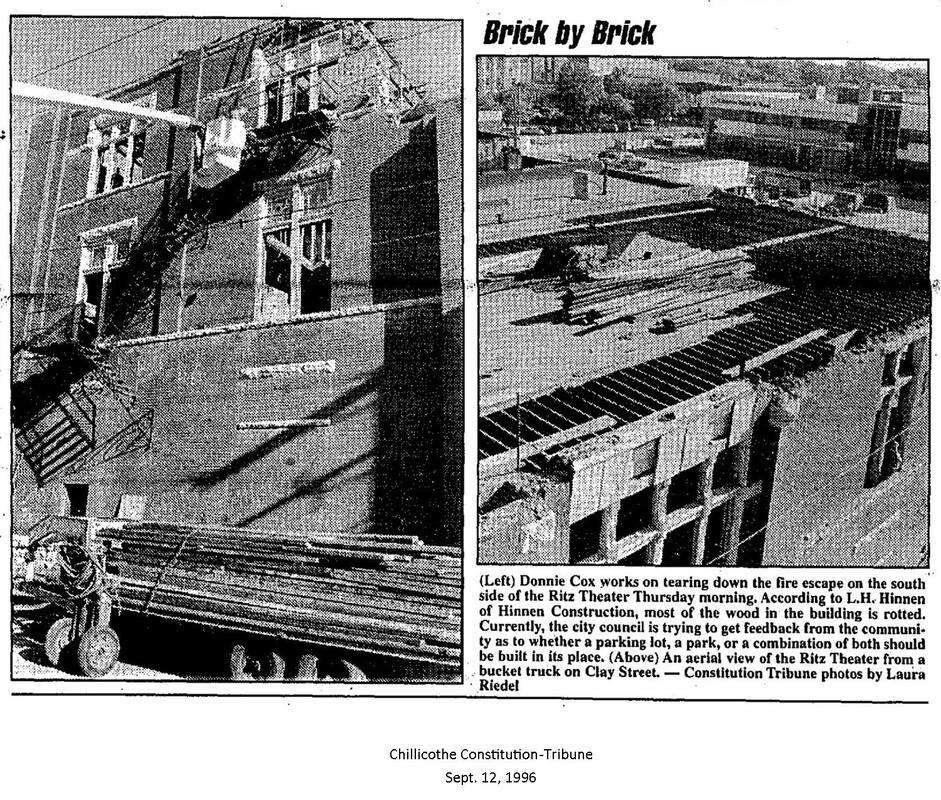 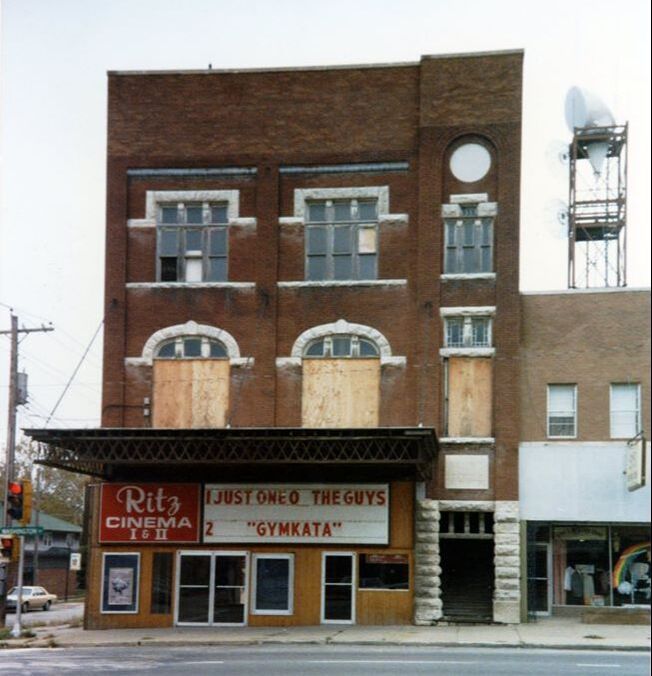 The Ritz in 1990. Source of photograph unknown. On file at the Livingston County Library archives.
There were attempts to turn the building into a restaurant/bar but these failed. In January of 1986, an Army surplus store opened up with Doug Hall as the new owner. The building continued to suffer inadequate maintenance, however.
The Ritz Theatre had re-opened briefly in April of 1985 as a twin cinema. George Day, who owned a theatre in Trenton already, bought the building with hopes of showing first run movies as well as old classics. He immediately ran into code compliance issues like needing a four-foot wide hallway when the building had a three-foot wide hallway. He discovered that the walls were triple-bricked and the concrete floors a foot-and-a-half thick, making alteration for code compliance virtually impossible.
The theatre was closed by court order on May 25, 1985. George and Margie Day owed promissory notes two local business entities. In court, the Days were fined in two separate charges for over $10,000. That was the end of the Days’ run with the Ritz. 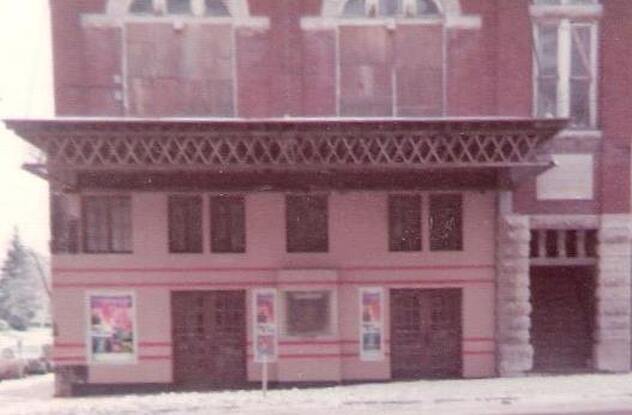 The Ritz Theatre c. 1985. Photograph courtesy of Danny Batson.
The building stood vacant and unused from mid-1955 to 1970. Owner L.O. “Jack” Girdner donated the building to the Salvation Army in 1970 after trying to donate it to another organization. By May of the following year, the Salvation Army had the building up for sale. Dennis Weisenburger of St. Joseph, Missouri bought the building in 1971.
On July 15, 1951, Mrs. V.R. Crookshanks, head of the Chillicothe Amusement Company, leased the Ritz to the Dickinson theatre chain. The upper floors of the building were used by Dr. Matheny, an osteopath, and for the Mason’s activities. By 1953, John Newcomer was managing the Ritz as well as the Ben Bolt and the Grand Theatre.
The Masonic Temple Association sold the building on February 22, 1946 to Vern Crookshanks and the Chillicothe Amusement Company. The management contract also changed to the Chillicothe Amusement Company. A grand re-opening was held shortly after with Glenn Beckett as manager. The Ritz was completely redecorated and new projection equipment added. They had already added a new loud speaker system in 1945. This was one of the first of its kind to be used anywhere in the country.
In the late 1930s and early 1940s, the theatre was leased to the Griffith-Dickinson Corporation, which also managed the Grand Theatre. The two movie houses were to be run as a single entity with first-run movies were to show at the Ritz; the Grand was to have re-runs as well as “outstanding pictures.”
Segregation was hardly mentioned. Seats for non-whites were limited to the southwest corner close to the screen which did not provide great viewing.
During the Depression years, the Ritz held “family night” movies with cartoons, weekly serials, and news reels as well as ads. This theatre also touted its “delightfully cool” environment. The Lobby carpeting was “glorious shades of red and black” with the “glitter of gold paint trim” and a velvet show curtain. In 1935 close to 1000 children came to participate in a pre-school theatre party put on by the J.C. Penney Company. The first true Technicolor movie, The Wizard of Oz, showed here in August of 1939.
The Ritz planned a huge party for October 31, 1932, Halloween night. The day started out with over 1000 farmers attending a conference called Swift Day at the Ritz. This included several films on topics such as brooding chickens and dairy management. The “big fun and whoopee” program in the evening included eight acts, seven of which were films. The final activity for the evening was a special, but secretive wedding held at midnight. The fact that a wedding was being held had been well advertised, but no one knew who was getting married until the event. The couple, Helen Cox and Pete Ross, received many gifts from local merchants who got some publicity out of the deal. 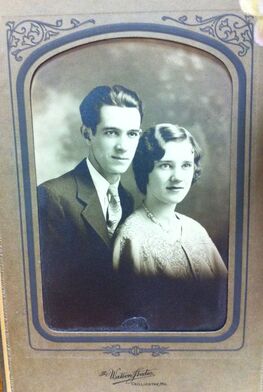 Pete Ross and Helen Cox got married at the Ritz on October 31, 1932. Photograph donated by Mrs. Pete (Helen) Ross to the Grand River Historical Society & Museum.
In 1931, the Masons leased the first floor and basement to Vern Crookshanks of the Chillicothe Amusement Company. R. Robert Warren, architect, drew up the plans.  Work began to create a theatre in the space with Earl Bradbury as the contractor. The Chillicothe Amusement Company owned the theatre fixtures and subleased the running of the theatre to the Hughes-Franklin organization.
The Ritz held its grand opening on June 3, 1931. Rick Ricketson, Midwest manager for Hughes-Franklin was present for the event as well as the new manager, Clayton Bacon. The first show at 7 p.m. was packed. The entertainment began with a news reel, followed by a Mickey Mouse cartoon. Mayor John Taylor gave a dedicatory speech, declaring the Ritz a top-rated theatre. He also spoke of the “value of talking pictures,” something fairly new at the time. The main feature then began, George Arliss starring in the “Millionaire.” People lined up outside for the second showing at 9 p.m.
Hughes-Franklin is last mentioned in the newspaper in November of 1931; their name stopped appearing on the ads after that time. In late March of 1932, Bacon left to run a theatre in Iowa and Dick Curry was hired to manage the Ritz. 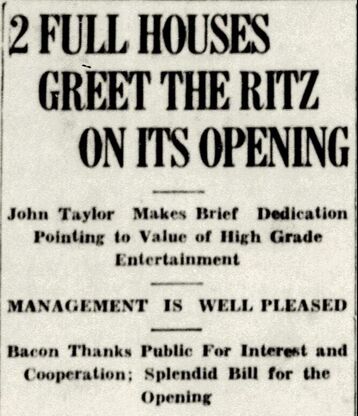 Chillicothe Constitution-Tribune June 4, 1931
​    The first floor was converted into a skating rink in 1930. And at some point in the early 1930s, Summerville Grocery was also located on the first floor. ​ ​
The Masons leased their extra space to local businesses. In 1900 the first floor and basement were leased to Chillicothe Buggy and Top Company. The second floor was leased to the Livingston County Circuit Court from about 1896 through at least 1909. (A new court house was built in the Square in 1914.) In 1904 Frank Scruby leased the first floor and basement for a grocery store. There was also a sanatorium at 504 1/2 Washington Street, the skinny part below the tower, through the stone archway. It was gone by 1901.
​After changing hands a few more times, the building landed with the Masonic Temple Association of Chillicothe in 1895. Dr. Reuben Barney was President, with S.L. Harris as Vice President, N.J. Swetand as secretary and W.W. Edgerton as Treasurer. They spent just under $12,000 with contractor Samuel Richards-Atwill to construct their large building. Dedication of the Temple occurred on Feb. 25, 1896 with the first lodge meeting held on March 6, 1896. 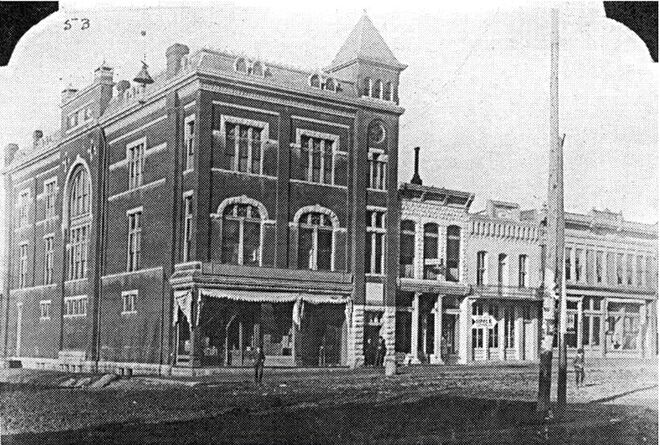 The Masonic Temple c.1896. Unknown source. On file at the Livingston County Library archives.
Originally a church was on this site: the first Christian Church built either in 1850 or in 1857, depending on what source you use. This was one of the earliest churches built in Chillicothe. E.B. Waples, a trustee for the church, sold the property to Frank Scruby in 1890. For a while there was a carriage factory in the old church building. 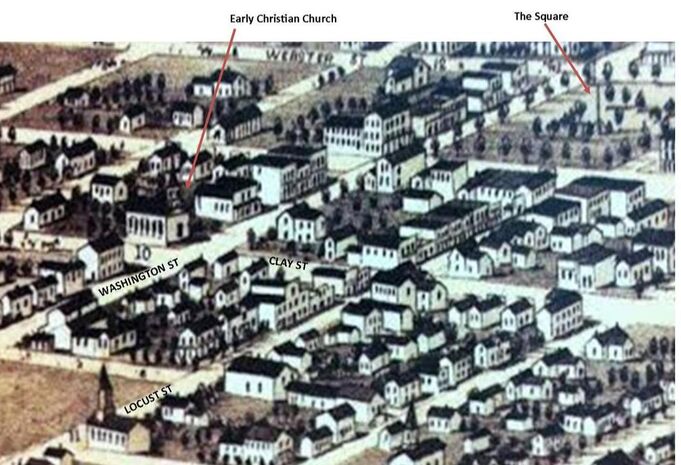