512 Washington Street
This building started out as Stone Music Hall in 1894. Later it was used by Chililcothe Music Company, Cummings Furniture, Grecian Village Inn, and more. 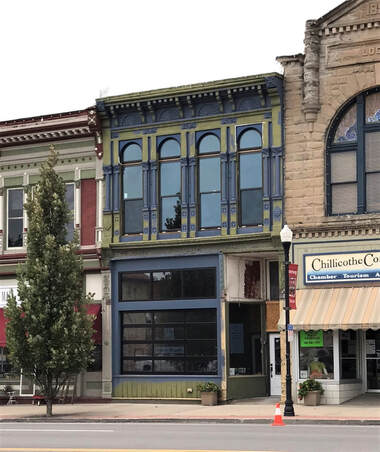 Stone's Music Hall is getting a much needed facelift. Picture courtesy of Kirsten Mouton, 2020.
Next building - loomis building-post office
previous building - ritz theatre
HOME PAGE - TOUR AND DISCOVER
Currently the Salty Hippo occupies this space. Owner Amy Jackson completely renovated the building, inside and out. Her business is both an art studio and retail space.
The Chillicothe Event Center opened in early 2019 but closed later that same year. Madison Avenue clothing was here briefly around 2018. In 2014 there was a phone book listing for Pacey’s Party Place. But that was also short lived and in 2015 the place was vacant again.
By 1997, the Salvation Army Thrift Store had moved in and remained through 2002. In the 1990s, clothing store S Bar S Western Store was located here.  M&D P Electronics also shared the space briefly in the late 1990s.
Night Owl Ceramics was located here around 1980. By 1982, the property was vacant. It was busy again in 1984 with Mister D’s Music & Electronics. M&P Electronics, a computer dealer, was here starting in about 1986 through around 1990, when the property was again vacant. 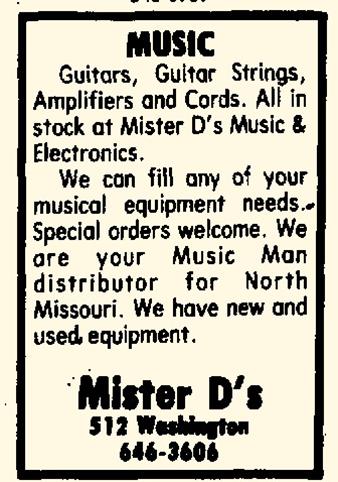 Chillicothe Constitution-Tribune July 26, 1983
A number of businesses were here in the 1970s. By late October 1973, Grecian Village Inn Steak House opened up at this location. The Kountry Kettle, run by Mr. and Mrs. Ernie Akers, had moved in around March through May of 1975. The Country Cupboard was here from about Sept of 1975 until May of 1976. There was a grand opening for the B&L Steak House and Pizza Restaurant on Jan. 2, 1977. ​
In July of 1969 Mr. and Mrs. Glen H. Wilson bought the Camera Shop business. The Klines then started Cindy’s Card Shop at the 512 location, named for their daughter, Cindy.
Mr. and Mrs. Woodrow Kline bought the building in early 1965 and expanded their business, Woody’s Camera Shop.
Chillicothe Radio & TV Service opened here from Jan. 2, 1957, to 1964. It was owned by Mr. Woodrow Kline who moved to Chillicothe in 1953. In 1960, Kline sold the business to Frosty Rose. Manager LaVerne Holeton remained as manager. 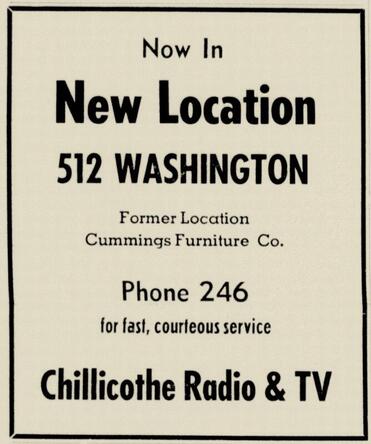 Chililcothe Constitution-Tribune January 4, 1957
​After over 50 years as a music store, the location changed in 1946 to Cummings Furniture Company, owned by Ed Cummings. They remained at this location through 1956. By January of 1957 they had moved up the street to 521 Washington Street. 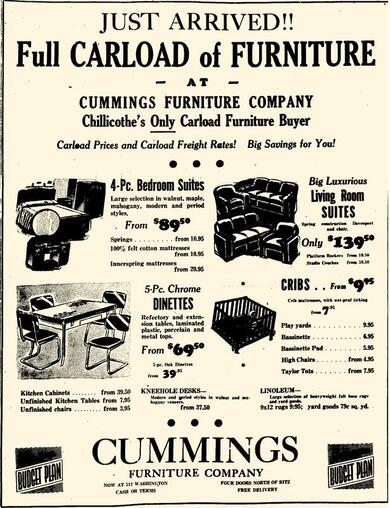 Chillicothe Constitution-Tribune March 6, 1947
The Chillicothe Music Company was located here from 1927 until 1946. R.E. Reynolds, who started as a clerk for Spencer A. Stone of the Stone Music Hall, continued the legacy of a music store in this building after Stone's retirement. Reynolds had started working at the store after his mother convinced Stone to hire him at the age of 17 in 1903. He stayed with Stone, except for two years at the Columbia Phonograph Company in Kansas City, until 1917. In 1921 he became a partner with Clyde Maxwell for the Chillicothe Music Company. (That company started in 1912.) At that time (1921) it was located at 620 Washington Street. In early 1925 Reynold bought out Maxwels share to become sole owner. They moved to 512 Washington in about 1932 and until 1946, moving to Locust Street after that. Reynolds and his wife retired from the business in 1956 and sold their music company, then at 511 Locust Street, to the Canterburys.
In 1937, Chillicothe Music Company shared the space with Long Maytag Company. ​
​     Stone's Music Hall was established in 1876 by brothers John A. and Spencer A. Stone, sons of Spencer and Ellen Stone. By 1886, only Spencer A. was listed for this business, which at that time included frames, toys, undertaking furnishings, china, pianos and organs. The 1890 Sanborn map shows this location as a music store. On May 7, 1894 the small, single-story brick building was replaced with a much larger 2-story brick one that went all the way back to the alley. Stone included a large elevator/hoist in the back of the store.
​    ​S.A. Stone remained at his music store until 1927 when he retired. He ran his own business longer than any other merchant at the time of his death in 1931. 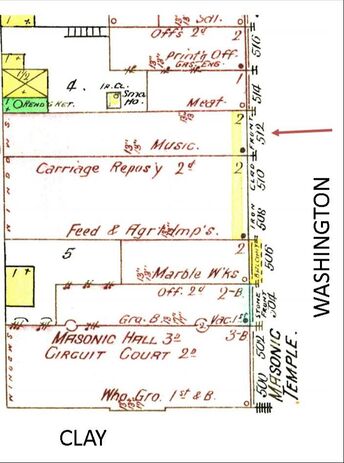 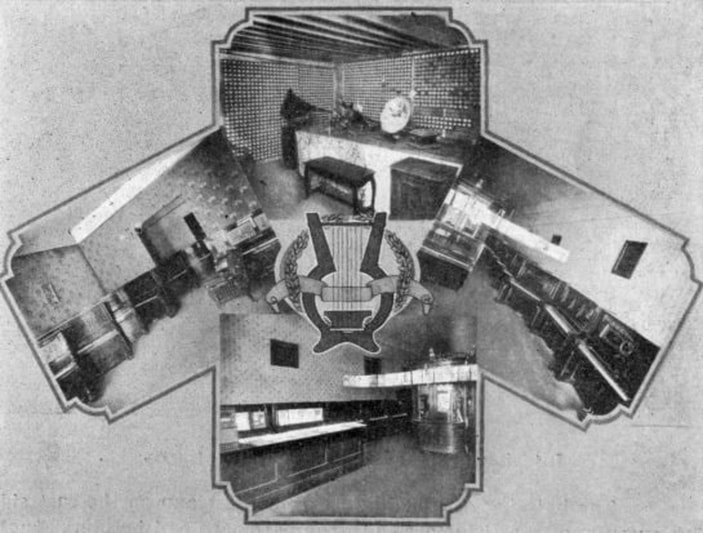 Interior of S. A. Stone & Son's Music Hall from Chillicothe, The City with a Future c. 1909. On file at the Livingston County Library archives.
​    Originally this was called Stone's Music Hall, then Stone & Son Music Hall. By 1904 it had changed to J.A. Stone Music and Sewing Machine Company. Spencer A. Stone had raised his son, John A. Stone in the piano and music business. John had opened a number of music stores in surrounding communities such as Hamilton, MO. Sadly in late May of 1909 he took his own life. An alert drugstore clerk tried to warn others, but they were too late. Despite doctors being called immediately, they were unable to save him. Quite a tradegy. John had two brothers, but neither seemed intersted in the music store business. And so it seems Spencer took up the store once more. 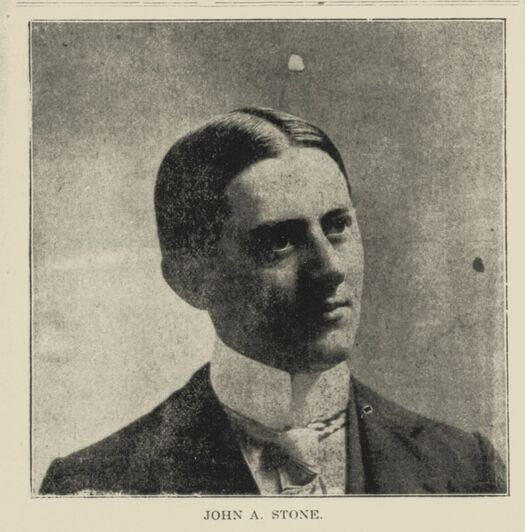 From John S. Stone's obituary in the Chilicothe Constitution May 26, 1909
Prior to the streets being renumbered c.1895, this address was 620 Washington Street. The 1890 Sanborn map shows a small, single-story music store in this location. The 1885 Sanborn map shows a one-story shoes store here. No building shows up next to the large agricultural implements store on the 1869 rendering of Chililcothe. 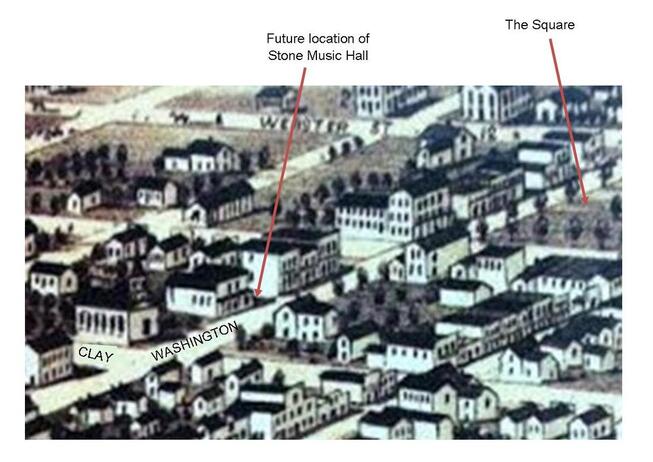