716 Clay Street
The Strand started out as a meat market, turning into a hotel, and finally an apartment building. The grand Staffod and Pringle Carriage Factory used to stand here as well as a saloon. 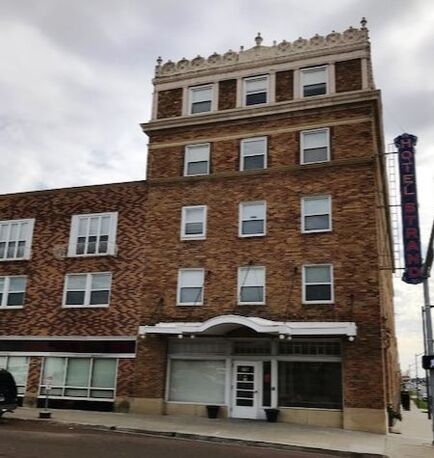 Strand Apartments October of 2019. Picture courtesy of Kirsten Mouton.
next building - ritz theatre
previous building - luella grand theatre
HOME PAGE - TOUR AND DISCOVER
The new Strand Apartments include the adjacent building to the east that was once a theatre and coffee shop. The renovated apartments opened in 2005.  ​Carlson Gardner of Springfield, Missouri, bought the buildings from Richard Smith and converted them into affordable low-income housing. The new structure was planned to have fewer but larger units than the previous Strand Hotel.
In July of 1978 Richard and Linda Smith bought the Strand Hotel. The hotel had 80 rooms which were converted to 20 rental units.

On June 1, 1961 B.T. Clark sold the Strand Hotel to Karl H. and Louise H. Schewe from Illinois. Dee Sherrill had been managing both the Leeper and Strand Hotels at that time. Mr. and Mrs. Jim Darr stayed on as resident managers of the Strand. The Strand had 83 rental rooms and 4 storage rooms as of 1961.
The Strand Hotel and Coffee Shop were leased by the Chillicothe Business College from 1942 to 1943 for the Army Air Force Technical School conducted at the CBC. About 900 soldiers rotated in and out. Another agreement was reached for training 250 soldiers in 1951. These were short-term arrangements, concluded in about a year. 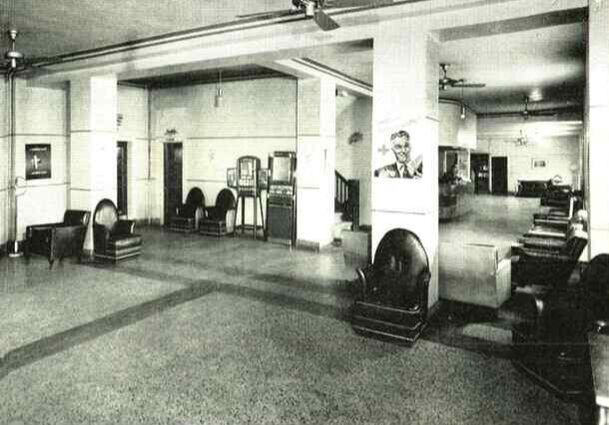 Barracks B Day Room. Former Strand Hotel lobby used by military students staying in Barracks B. Picture from the Chillicothe Business College 1942 DUX yearbook in the Livingston County Library archives.
​    ​Due to ill health, owner John G. Kling sold the Strand in late 1943 to Bert Clark and Mr. Cardner who also managed the Leeper Hotel on Washington Street.
In 1929 Kling added a fifth story to the Strand Hotel and purchased the vacant lot south of the hotel where he built a parking garage with a corrugated iron cover and enough spaces for 80 cars.
In 1928, Kling had bought out the other investors and became the sole owner of the Strand Hotel and Coffee Shop. He also bought the Joe Young Grocery building on the other side of the coffee shop in 1939 with the intention of connecting it to his other buildings. (That building burned in the 2000s and the lot is now part of the parking area for the Library.) 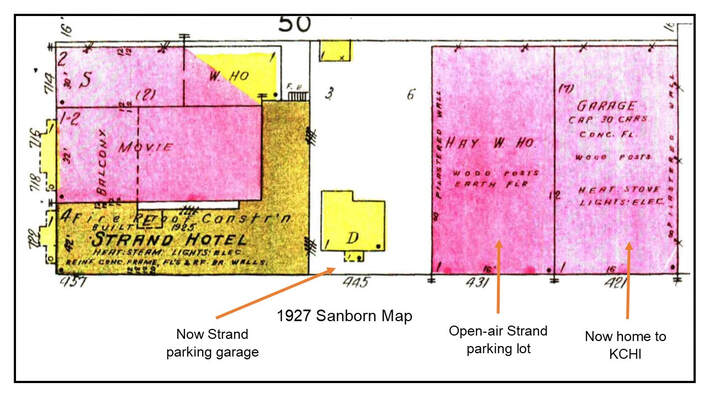 Dick Williams lease on Luella Hotel expired Sept 1, 1924. W. P. Cuff, of W. P. Cuff Enterprises, Inc., Haley Reed, and John G. Kling (a catcher for the Chicago Cubs baseball team, but lived in Kansas City) bought Young building and planned to raze the hotel to make way for new larger hotel. They built a 50-room 3-story hotel for $75,000 in the “European plan.” Local contractor S. E. Shultz supervised the construction work. The hotel extended south to include most of the stage of the theatre, but this did not affect the theatre as they were showing only motion pictures by this time. The two buildings were connected to look like one structure.The grand opening was held Aug. 16, 1925. It is claimed that thousands toured the new building from 6:00 p.m. to 10:00 p.m. The hotel had 69 rooms and was fireproof.  Former Strand Theatre manager, Edward N. Smith, came over to be assistant manager of the new hotel. Parking to the west of the hotel was completed shortly after the opening and included tan gravel. The Chillicothe Transfer Company, under John U. Mitchell, was contracted to provide buses and taxi cabs for patrons to and from the train stations. 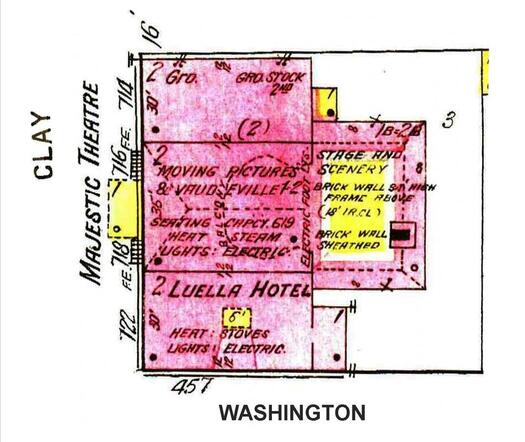 The 1916 Sanborn map shows the Luella Hotel was two stories tall.
In 1914 F.L. Sparks bought hotel and remodeled it. Mrs. Cora Kennedy managed the Luella Hotel but left in 1917 to manage another hotel in another city.
Frank Rickett owned Luella in 1912 and bought Henrietta Hotel on the corner of Jackson and Locust Streets. Orville C. Heath from Dawn and Miss Elizabeth Lewis of Braymer were married at the hotel on May 18, 1910.
On October 17, 1905, owner Al Houston sold the Luella Hotel. No mention is made of whom he sold it to or why.
Frank Preston and his wife ran the hotel in 1901. Preston was in the saloon when drunken patron Richard Burke threw and umbrella at him, hitting him below the eye and causing serious injury. Later that same year, a boarder stole two gold watches from the Prestons before running out of town.
The 1896 Sanborn map depicts a meat market on the first floor with sleeping rooms on the second floor.
Edward Stafford and Henry J. Pringle opened a wagon and buggy factory and showroom in 1869 at the corner of Clay and Washington Streets. Their large three-story building had a bell on top of the middle section. The office, wood shop, and showroom were located on the first floor of the corner part of the building. The paint shop and a store room were situated on the second floor. A workbell sat atop the three-story middle part of the building. Parts for trim were laid out in the smaller third story section. The eastern section of the building acted as a blacksmith shop with five forges. William Pringle worked the first forge; Henry Pringle worked the second forge; “Tin” Wolf was at the third forge; Leslie A. Stewart ran the fourth forge with Mr. Chamberlain working the fifth forge. It was not uncommon to store 400 wheels on the second floor of this eastern section. The platform on the second floor of the western side, overlooking Washington Street, was where finished products were put out to dry. 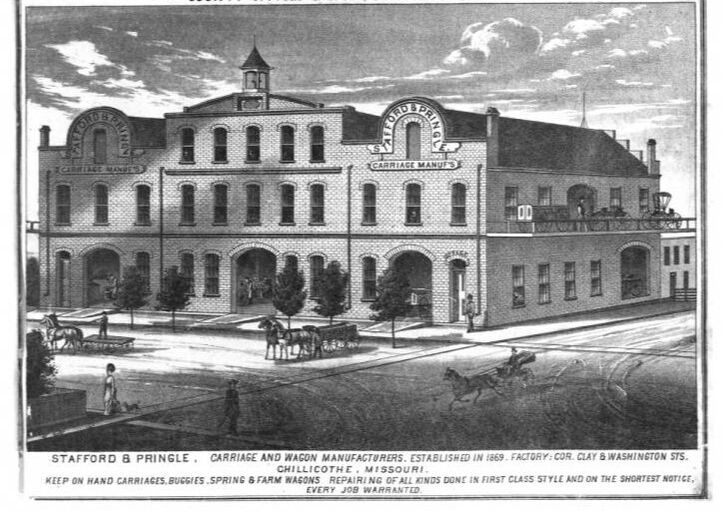 Stafford & Pringle Carriage Manufacturers from An Historical Illustrated Atlas of Livingston County 1878 digitized by the State Historical Society of Missouri.
​  Going even farther back, the middle section of the building was once the site of Hale's saloon owned by Thomas Conn. The night of September 23, 1872, Conn got into an argument with policeman Tom Fox. In the shuffle, Conn was shot and killed. A jury decided Fox had acted in self-defense and he was acquitted.
next building - ritz theatre
previous building - luella grand theatre
HOME PAGE - TOUR AND DISCOVER