​This is the place where the first bread was commercially sliced thanks to Frank Bench and Otto Rohwedder on July 7, 1928.
previous building - loomis buoilding - post office
HOME PAGE - TOUR AND DISCOVER
comments?

This building is now home to the Sliced Bread Innovation Center. It celebrates the Highway of the American Genius, Highway 36. Turns out there were a lot of inventor and creative people along this route in Missouri. Names like Pershing, Disney, Penney spring to mind. And they pay homage to Frank Bench and Otto Rohwedder, the baker and inventor team who created sliced bread.
In March of 2015 the Sliced Bread Corporation purchased the original bakery building where Frank Bench and Otto Rohwedder made history. This non-profit 501(c)3 group formed out of an informal committee that had been meeting for a number of years. Cathy Ripley, editor for the local Constitution-Tribune, discovered a headline from 1928 declaring the first sliced bread at a baker on Elm Street. She was looking through microfilm at the Livingston County Library grabbing interesting headlines and articles for her first Dateline book in 2001. She mentioned the headline to a visiting reporter from a Kansas City newspaper. Apparently that reporter did a little digging and the next thing Cathy knew, her phone was ringing off the hook from places all around the country and the world! Everyone wanted to know if it was true: was Chillicothe the home of sliced bread? Eventually Cathy was put in touch with Richard Rohwedder, Otto's son. He was able to confirm that the first commercially sliced bread happened at the Chillicothe Baking Company on Elm Street. He even came back from out of state to visit Chillicothe one last time in 2003 and brought a notebook with written proof that Chillicothe had sliced bread first. it is difficult to understand how something like this can be forgotten over the years, but it was. A committe was formed to ensure that didn't happen again. You can read more about the group that formed here​ http://www.homeofslicedbread.com/bread_press_bakery.html
​ From 1999 to 2015 SMC Electric Supply operated out of the building. There was no listing in 1998. In 1992 Dickerson Dueme Tool and Engineering started out in this building; they outgrew it by 1997. In 1991 the building was listed as vacant. Leonard Distributing Company, a beer bottling business utilized the building from 1975 to 1990. Hudnall Distributor Company used the building starting in 1959. In 1963 the directory added that beer was a main staple for the business until 1974. From about 1947 to 1959 the Whistle Vess Bottling Company operated in the building. The Cleo-Cola Vess Beverage Company run by Joseph R. Donovan was housed here starting in about 1940.
The Depression hit in the late 1920s and lingered into the 1930s. Other bakers also started getting their own bread slicing machines. By 1931, Bench went out of business and sold his bakery building. A new sign was hung out front, Al's Bakery.
​
Sliced bread happened because Otto Rohwedder and M. Frank Bench had a vision and brought it to fruition at the Chillicothe Baking Company on July 7, 1928.
In 1928 Chillicothe baker Marion Franklin "Frank" Bench was approached by Otto Rohwedder to try out Rohwedder's new Breadslicing Machine. In fact, the two had been working on perfecting the design for the past several years. The story goes that Otto had been turned down by every baker he approached for fear that once bread was sliced, it would become stale very quickly. Bench agreed to became the guinea pig and on July 7, 1928, the first loaves of sliced bread were produced. Kleen Maid sliced bread was an instant success and bread sales increased 2,000 percent in the first two weeks alone. Bakers from as far afield as St. Joseph and Kansas City wanting to get in on the latest innovation in baking, brought truckloads of bread to the Chillicothe Baking Company to be sliced while they waited for their own bread slicing machines to be manufactured.
To learn more about the life of Frank Bench, click here to go to GoLivCoMo.
​     Bench was a successful baker in Chillicothe. In 1921 he built a brick bakery at the corner of Elm and First Streets. His new Chillicothe Baking Company held its grand opening on September 27, 1921 and featured state of the art baking equipment with an oven capable of producing 700 loaves of bread per hour, or 1800 loaves of bread per hour when running at full capacity. The bakery employed eight people and catered wholesale to north central Missouri as well as home consumption in Chillicothe. 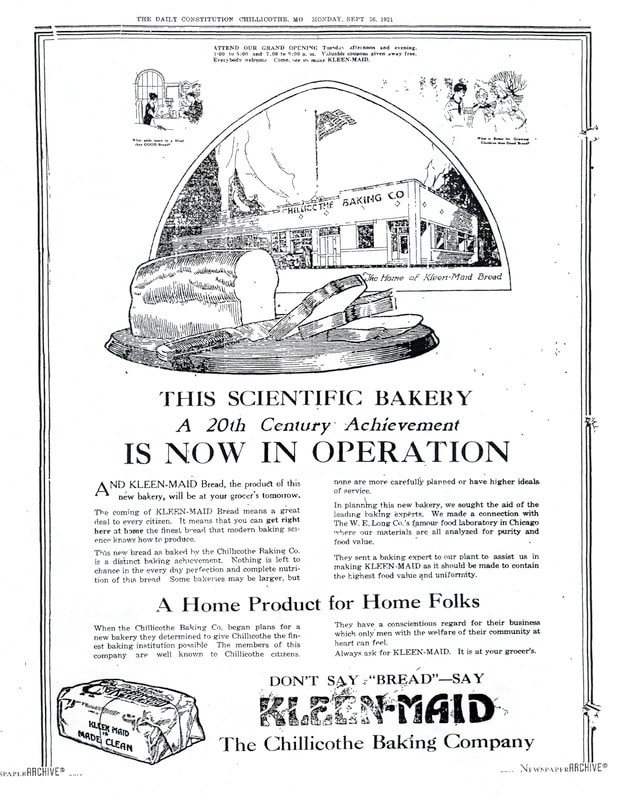 Chillicothe Daily Constitution September 26, 1921
Bench also produced mayonnaise and thousand island salad dressing. This venture was apparently so successful that in 1923 he had to re-open his original bakery next to his home to enlarge the operation and produce more for local customers as well as clients in St. Joseph and Topeka, KS.
In 1916 Bench moved from Browning, Missouri, to 252 Clay Street in Chillicothe and established Bench’s Modern Steam Bakery next door at 433 Martin Street. He was quite successful in his business which included a delivery wagon as well as home pastry delivery.
​     In 1909 and 1901 there were houses in most of the area surrounding this lot. Lot 8 just had an outbuilding in the southwestern corner; most likely this 1 1/2 story structure was a barn or other outbuilding like a carriage house or stable. 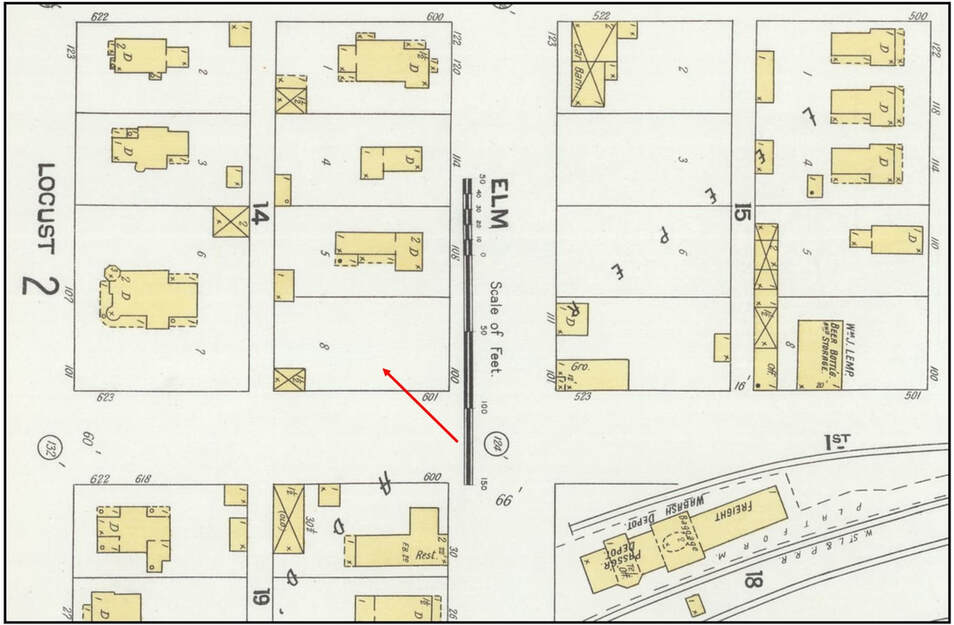 1901 Sanborn map US Library of Congress
By 1890 there is a small outbuilding on the lot in the far southwestern corner. An outbuilding is all that is located on lot 8. There were three homes to the north of lot 8. The train depot was across the street. A lot of the lots around this area were not yet developed. 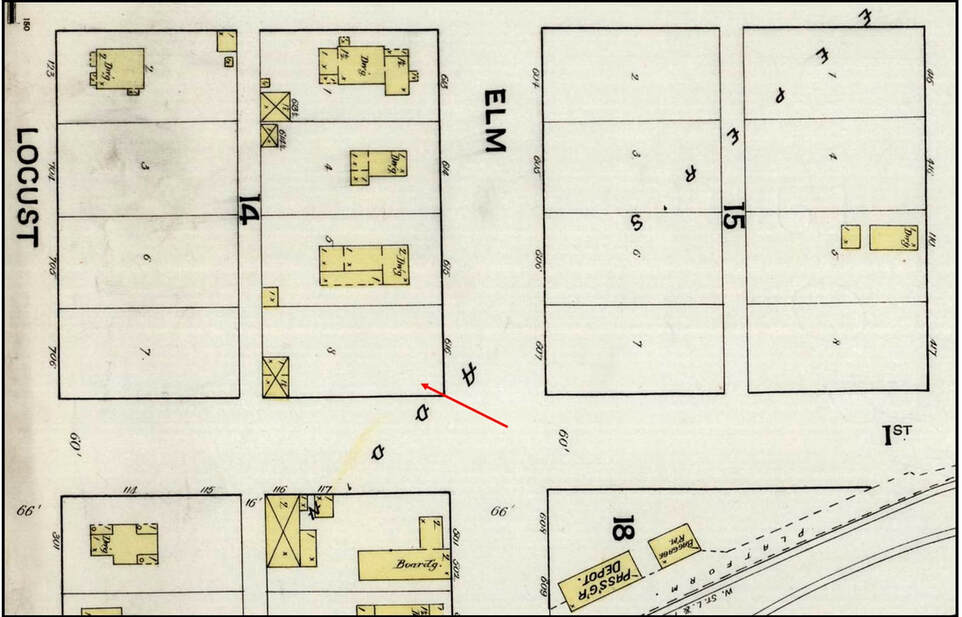 1890 Sanborn Map US Library of Congress
​     The 1885 Sanborn map does not cover this area.
​     In this earliest rendering of Chillicothe, the lot at the corner of Elm and First Streets was part of a homestead that took up the eastern portion of the half block. 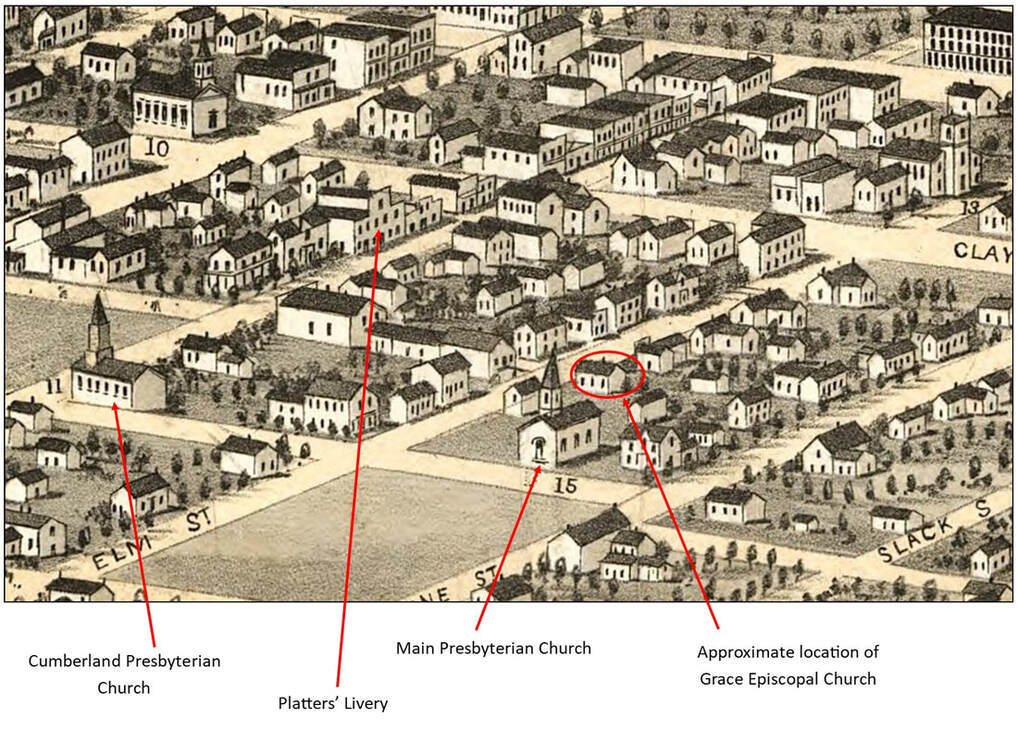