624 Cherry Street (southwest corner with Webster Street)
In about 1872 Livingston County erected a brick building here to house county office and store records. They sold the building in 1914 and by 1917 it had been converted into the Oakland Apartments. The building was torn down in May 2022, just about 150 years after being built.
previous building - Leeper hotel
next building - Hartman's ladies ready-to-wear
HOME PAGE - TOUR AND DISCOVER
comments?
Many people refer to this building as a court house, but it was most likely used for county offices and record storage. This building was always noted on the old maps as “county offices” and there is no evidence that it was used as a county court house. The centennial Constitution-Tribune edition states emphatically that the building was never used as a courthouse!

Previous to the 1870s, some county facilities, such as the jail, were housed in the 400/500 block of Elm Street. County offices may have been housed here as well, but they were also noted as spread all over the downtown after the third court house (second one built specifically for that purpose) was torn down in about 1865. Court was held in various locations such as the City Hall and the Masonic Temple.

Around 1869, the county built a nice brick residence for the sheriff with a jailhouse behind it on the northwest corner of Webster and Cherry Streets. Then around 1872 a large county office building was erected across the street from the jail. This brick building was two stories with three sets of windows on each side for both the first and second floors. There is no indication of a basement on the old maps, but there is partial one in the southwest portion of the building. The staircase was located in the center of the building just inside the front door, which faced east to Cherry Street. There were two chimneys on the north side and two on the south. All of the windows originally had iron or tin clad shutters, and even the main entrance door had shutters. There was a small widow’s walk on the very top of the building. 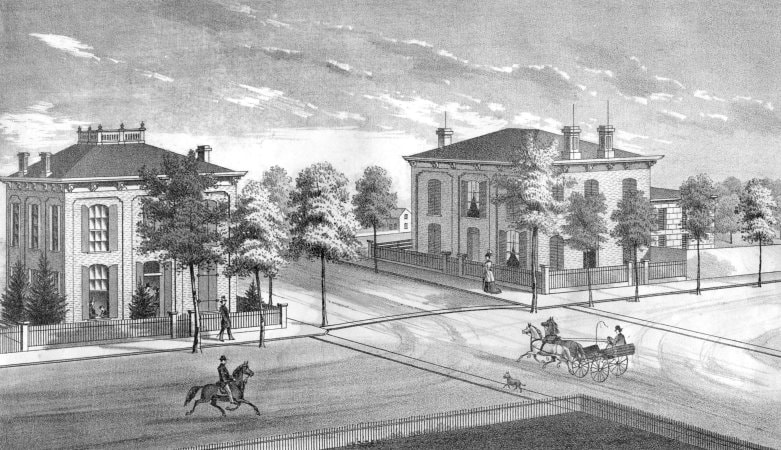 This illustration is from the 1878 Livingston County Illustrated Atlas, with the county building on the left and the jail on the right. Courtesy of the Livingston County Library.
Between 1885 and 1890 the county needed more room and added one-story brick vaults in the back (west side) of the building. The doors to the vaults were iron or tin clad with access only from the interior of the building. There was a small wooden structure between the vaults that had access to the back (west) of the property.​
By 1896 a second story had been added to these vaults and to the wood structure between the vaults. No windows are shown on the western side of the building at this time; it is assumed that the windows on the first floor on the north and south sides became the doorways to the vaults. It is also assumed that the windows remained on the second floor but were not shown on the map. At the far western edge of the lot were two single story, wooden outbuildings with shingled roofs. The building was still designated on the map as county offices. On the 1909 map the wood structure between the vaults was shown as bricked.
After the county built the existing courthouse in 1914, they sold their county office building at public auction on March 18, 1914. Local lawyers, Colonel Scott J. Miller and Paul D. Kitt, purchased the property for $1,825. By July of 1914, with the new courthouse completed, records and county officials’ offices were moved out. Miller and Kitt had not decided what to do with the property. 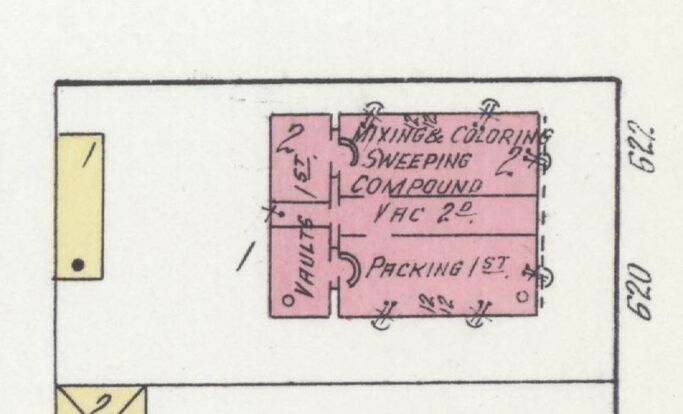 1916 Sanborn Map, US Library of Congress, Geography & Map Division
By 1917, Miller and Kitt were renovating and remodeling the old county building into four apartment units, including stuccoing the outside. This opened as the Oakland Apartment House that same year, named after Scott’s wife, Oakland.

The 1927 Sanborn map shows that a wooden front porch was added to the front/east side, two stories high. In the back/west of the building, it appears that the brick vaults were replaced with wooden porches. All of the changes in the back/west side of the building have seriously denigrated the structural integrity of the brick on that side.

Though Scott Miller died in 1942, and Oakland in 1943, the name on the building remained Oakland Apartments throughout the years. By the late 1990s the building changed renters often and was not fully occupied. The last renters were listed in 2014.
​
Say goodbye to this old girl who has served us for so many years. She came down the week of May 16, being gone by the 22nd. ​
Most old commercial buildings have walls that are three bricks thick, according to the contractor, but this one had walls four bricks thick. The mortar between the bricks was badly deteriorated and the brick walls had large gaps between the layers in many places. There were places you could put your hand into easily and even a bird's nests. The overhanging roof may have helped hold the north and south walls in place. And maybe the stucco helped too.
Previous building - leeper hotel
next building - hartman's ladies ready-to-wear
HOME PAGE - TOUR AND DISCOVER