702 Washington Street
If you stand at this spot now, you will see the Donut Palace. But this was once the Leeper Hotel, built in 1884-85. 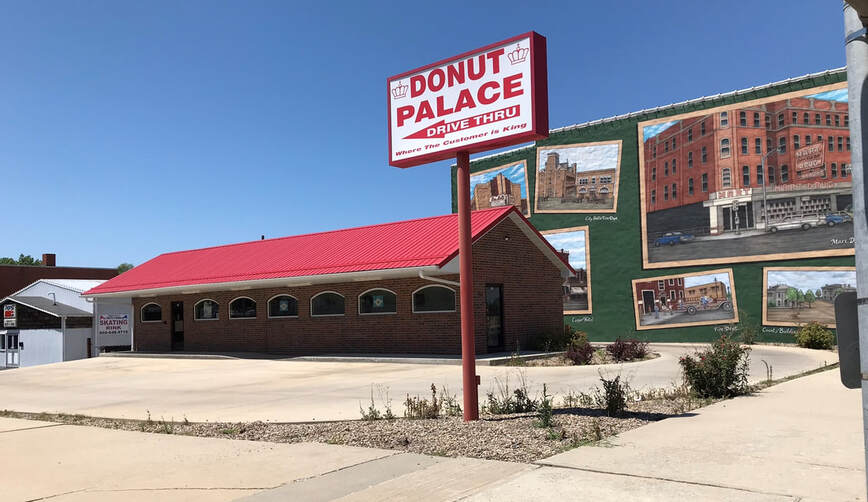 You are in the right place if you see this. Actually there is a picture of the old Leeper and the building after it became Drug Mart on the mural. Picture courtesy of Kirsten Mouton 2020.
next building - county building
previous building - city hall
HOME PAGE - TOUR AND DISCOVER 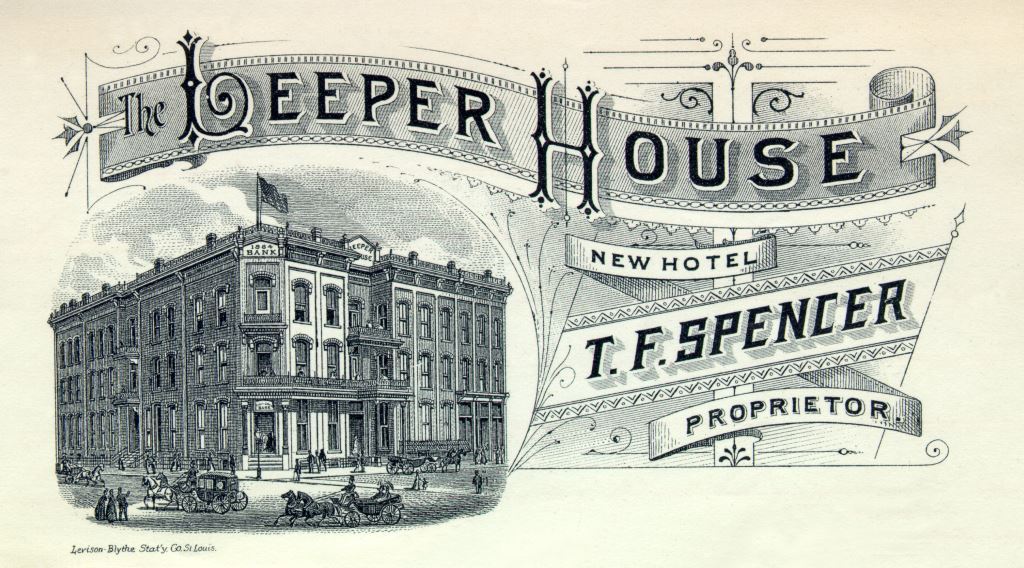 Ad, source unknown; on file at the Livingston County Library.
​The Leeper Hotel (or House - the terms seem to have been used at the same time) was built in 1884-85 by Andrew Leeper and S. McWiliams with 32 rooms. It was one of the leading hotels in north Missouri. Thomas F. Spencer was the first manager; Mr. G. D. Burckhartt was managing the place in 1907. The hotel also housed a number of other businesses, such as Mrs. Ballard’s dress making, doctors making special visits such as Drs. Boyd and Aylesworth, the Leeper Hotel Barber Shop run by Schaefer and later Schaefer and Peery, and Bismark’s Café and Coop Powell’s Saloon in the basement. There were also four salesmen’s sample rooms in the basement.
​   ​ One of the first two incandescent lamps were lit in front of the hotel in 1885, with another “exhibition” on Jackson and Washington. Ads from the 1890s use Leeper House and Leeper Hotel interchangeably. There was also a barn/livery for people to "park" their horses and carriages. Z. B. Myers Livery used the Leeper House as a pickup point. 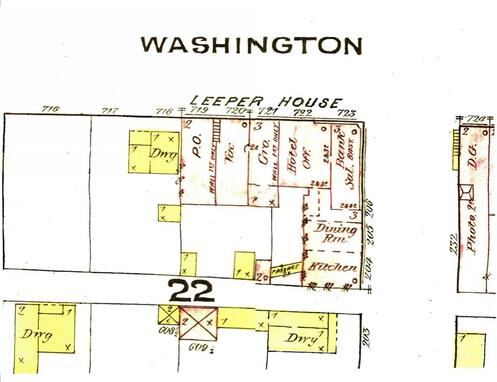 1885 Sanborn map
​    Andrew Leeper sold his hotel in 1903 to Mr. Lattain from Illinois. The first change he made was to replace the dining room dishes. Other improvements for the dining room were planned.

On March 3, 1910, the hotel was sold to Bert Clark and Harry Carder, both of Maryville. They undertook a huge remodel for $75,000, bringing in Architect Carmen of Kansas City to complete the design. Upgrades were to include a glass front and mosaic tile on the first floor. Frescoes were to be added throughout the hotel. A pool and billiard room as well as a barber shop were put in the basement, along with the necessity of all new flooring. The bank remained where it was. The hotel, when purchased, had 40 rooms. Until this time there had only been one bathroom in the building and it was on the second floor. Clark and Carder added 11 bathrooms plus running water in every room. In the fall of 1910 a fourth story was planned along with an electric elevator. All new furniture was also purchased as the building sale did not include any of the furnishings. Clark and Carder were going to make this already popular hotel the “best hotel in Missouri outside of the large cities.” They renamed it the New Leeper Hotel.
​    Due to the high volume of business, 1916 Clark and Carder made a number of dramatic changes in 1916. A four-story addition was added to the hotel under the supervision of architect Warren Roberts to allow for a new kitchen and twelve more rooms. Floors were retiled. The People’s Savings Bank moved out and the hotel used that space as part of its lobby. More marble wainscoating was added.  The dining room was enlarged. By the end of the renovations, there were 30 private room with baths with hot and cold water, electric elevator service, telephones and other “convenient appliances.”
​
In 1919 more space was needed and a “Springhill addition” annex across the alley was added with 34 more rooms. The dining room was also enlarged. At some time in the 1920s a fire sprinkler system was added. The building got an exterior facelift in 1926. At this time Clark also added a soda fountain, made interior improvements including an “electrically equipped” new coffee shop in the west of the building. This was a continuation of the changes started in 1925. 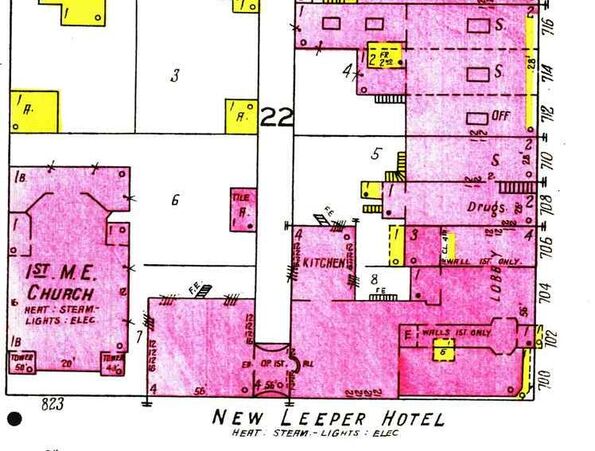 1927 Sanborn map
​
There was another huge renovation in 1929. Architect Warren Roberts was again contracted for “changing the exterior to increase attractiveness.”  The exterior brick and stone was replaced with a more “Spanish” look. There were plans for new drapes and furniture in 40 of the hotel rooms, the lobby and the reading room. 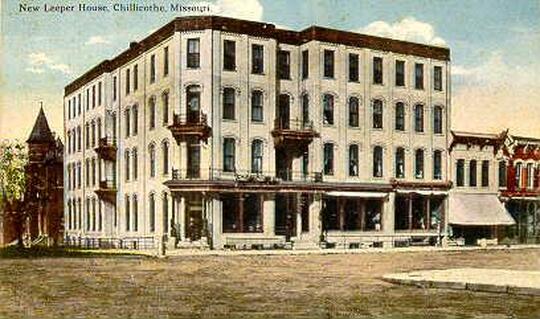 New Leeper Hotel, date and source unknown; on file at the Livingston County Library archives.
In 1937, as part of the Livingston County's Centennial, the Leeper Hotel, under the management of B.T. Clark, built a new coffee shop with Harold Swan as manager. The entire hotel was completely redecorated inside. Air conditioning was added to fifteen rooms as well as the coffee shop and dining room. A fire-proof and connected garage was also added.
​
For many years, the hotel continued as the Leeper Hotel with a coffee shop and housed a barber shop in the basement. Only one other business was noted here during the Clark-Carder tenure: the Peter Pan school. 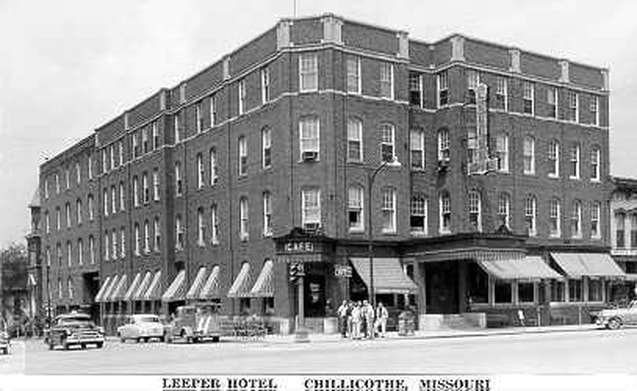 Leeper Hotel, date and source unknown; on file at the Livingston County Library archives.
​    ​Clark and Carder sold the building on May 16, 1962 to James S. Lambert, a local businessman. The first floor and basement of the Leeper Hotel were removed and remodeled, all the while the upper floors were still occupied with live-in residents. James and brother Joe created Mart Drug in 1942 and placed it in their new building in late November 1962. This new facility housed a prescription department, cosmetics, farm and home supplies, news stand, toys, tobacco and beverage department, as well as the Golden Grill café. Several employees had served there for 30-40 years as of 1962: Dee Sherrill, K.D. Dearing, and Gene Ewing. A new name of Lambert Hotel was now given to the structure. Jim Lambert died unexpectedly in 1965. At the end of 1966, Joe Donovan, president of the Drug Mart Company, bought the Lambert Hotel.
​     The rest of the 1960s saw the Lambert Hotel continue, run by Mrs. Ethel Norman, with Drug Mart being the main business on the first floor. Charles Martin maintained a real estate office as well as Henry Hochslatter a furnace repair shop on the premises. The basement hosted the Golden Grill restaurant and Mart Drug home wares. In the late 1970s the Golden Grill was replaced by Goofy’s Deli & Ice Cream Shoppe.

The building was sold to Mr. and Mrs. William Mast in 1980. The Galaxy arcade was added in the basement in 1981. In 1982 the hotel annex was torn down. By 1989, the hotel changed names to the Washington Street Apartments with Mart Drug Pharmacy still on the first floor. 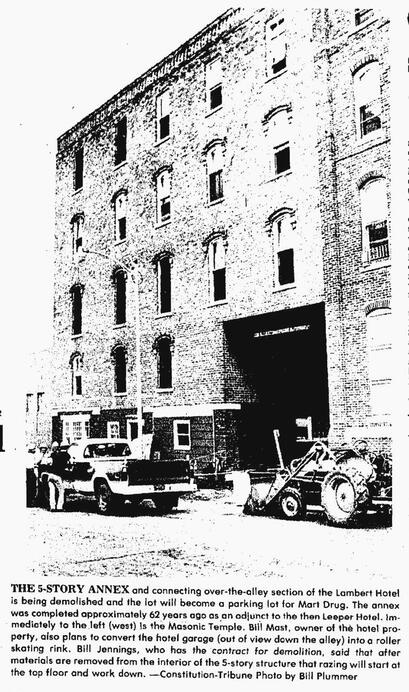 Chillicothe Constitution-Tribune May 26, 1982
​    ​ Bill Mast sold the building to Jon Martin in June of 1995. The Martins remodeled the first floor and opened their Martin House gift shop in August of that same year. The Fountain, a soda and sandwich shop, was added to the basement in 1996. The Martins moved their business out in 1999 and sold the building. The building then sat vacant and unused. In 2000 the city thought the building was vacant and listed Letha Dunn as the owner. 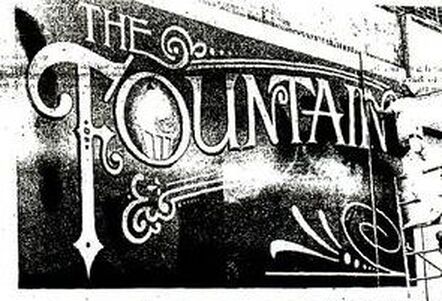 Chillicothe Constitution-Tribune June 10, 1996
Fred White bought the salvage rights to the building in 2000 just before it was to go to auction. He planned to remove the top two or three floors. Interior woodwork and fixtures were removed. White investigated grant money but since the interior details had been removed already, the structure was no longer eligible for assistance. The entire old hotel was scheduled to be razed in early 2002 when Doug Dennis intervened. He and several others purchased the building and planned to renovate it. Finding funding to do the work was difficult. They did manage to get a new roof on and erected a new west wall.
​
By 2009, little progress had been made on renovating the structure and it was in poor condition. In 2012 a crew began demolition of the structure. A huge fire broke out in June of 2012. While the fire was ruled accidental, it left no alternative but to tear the rest of the structure down.
​    The building prior to the Leeper Hotel was a two-story brick bank. The Bank of the State of Missouri, the first bank in Livingston County, was started in 1856 by John Leeper, father of Andrew Leeper who later founded the Leeper Hotel. That bank was originally located just south of the Strand Hotel (at Clay and Washington), but later moved to the corner of Washington and Webster Streets. In 1859 it was reincorporated and became the People’s Savings Bank. In
1866 Sidney McWilliams and Judge McFerren became involved in the bank.

​The People’s Savings Bank sold their building and lot on the corner to Andrew Leeper, S. McWilliams and J. Ware in 1883 for the purposes of building a fine hotel. Leeper owned half and McWilliams and Ware owned half. The bank had a long-term lease in the new hotel. Late in 1883, the bank moved out to temporary quarters and began tearing down their former building.

Andrew Leeper built a fine home at 910 Washington. Leeper died in 1912 in that fine home. His obituary said that while he travelled extensively, he wanted to live and die in Chillicothe, “the ideal spot of the world.” HIs home was later turned into the Lindley Funeral Home which is still at that location. 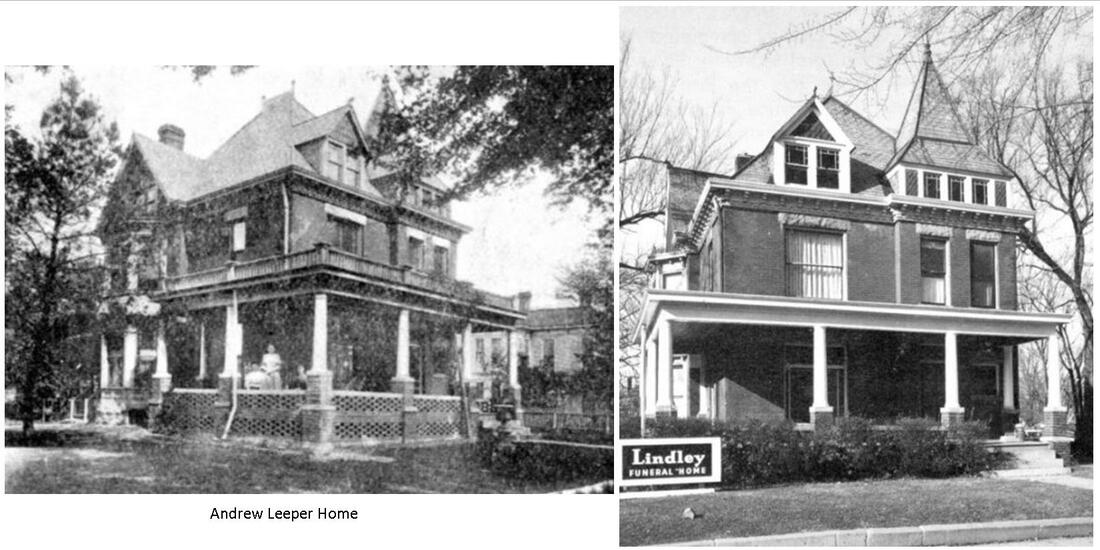 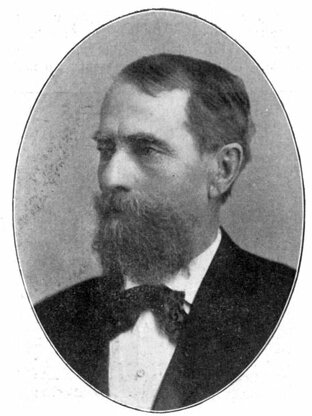