700 Webster Street
There was a courthouse in the Square from about 1841 to 1865. The Square became more of a park until 1914 when the current courthouse was built. 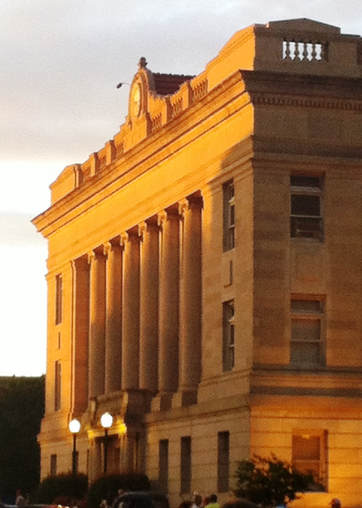 Livingston County Courthouse c.2016 Photo courtesy of Kirsten Mouton.
next building - first national bank
previous building - Farmers store
HOME PAGE - TOUR AND DISCOVER
​    The county's fourth courthouse was completed on July 11, 1914 and opened to the public on July 25, 1914. The architect, Warren Roberts, and lead contractor, L.W. Dumas, created this magnificent building in a classical design and made if fireproof. The facade is made of Oolithic limestone from Bedford, Indiana. Contractors and tradesmen from all over the Midwest were hired to do their parts, including the Chillicothe Iron Company. There were originally three sets of wiring: one for the lights and motors, one for the telephones, and one for the big clock up top. Ninety tons of structural steel were used to build the court house.
In 1921 a memorial fountain was added to the northwest corner of the courthouse Square to commemorate William Browning Jr., son of William Browning who owned the Browning House (later the Henrietta Hotel then Clarks Drugstore, now Hometown Pharmacy). Browning Jr. was a district manager for the International Harvester Company and a prominent citizen of Chillicothe for many years. After his death, his family and friends created this memorial that was accepted by Frank Sheetz for Livingston County and Mayor Ashby for Chillicothe. The monument was placed just inside the park and faced northwest towards the old Browning homestead on north Washington, where the Ben Bolt once stood. In later years the fountain was refurbished and moved to the “north plaza” as of 1964. It seems by the 1970s there is only one fountain on the south side and no mention is made of it being the memorial fountain. 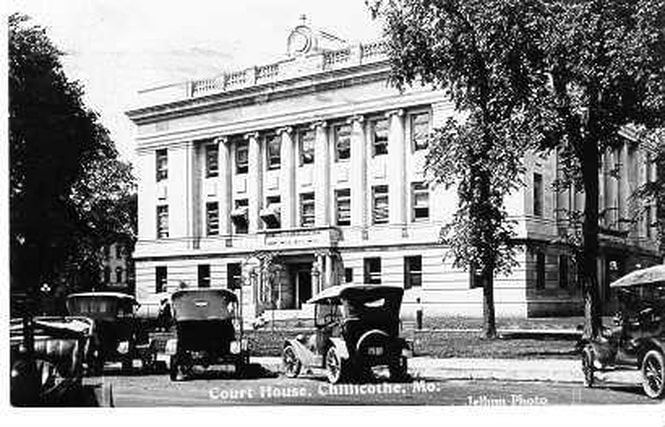 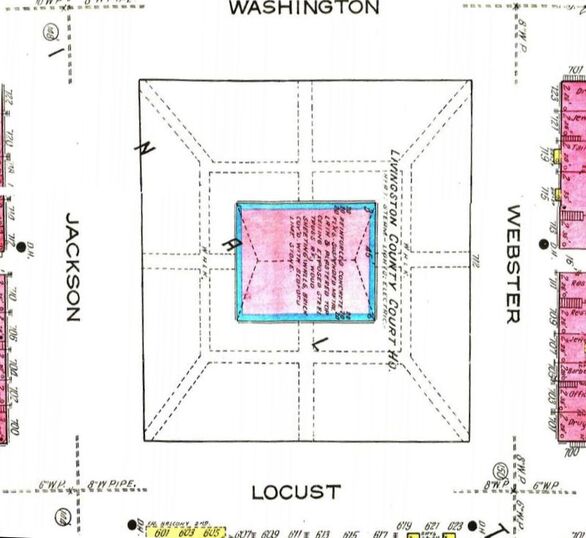 1916 Sanborn Map
​    Between c.1864 and 1914 the court used a number of buildings. Court and court-related proceedings took place on the first floor of the City hall as well as other buildings such as the Masonic Temple (the Ritz) at the corner of Washington and Clay Streets. Court records were stored in the old county building at Cherry and Webster. But even that got full with records placed in the attic, on the floor, in hallways and stuffed into the "vaults" in the back of the building. Some thought there wasn't sufficient reason to build a new courthouse. Funding was cited as a big concern. Others felt that with 15 saloons, a tax levy for a new courthouse was always defeated. But in 1912, four years after passing the Local Option banning saloons, there was suddenly more support and folks were more agreeable to the idea of a tax levy. At least that's the claim. 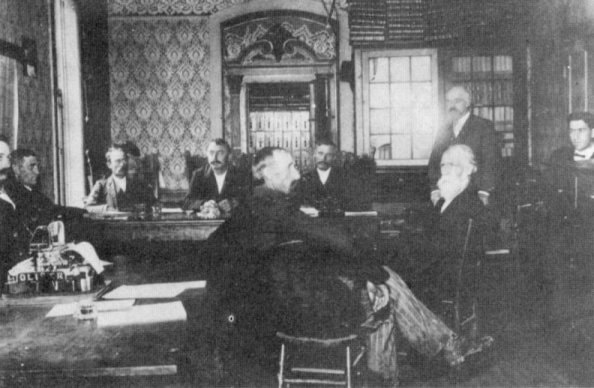 Judge Christian Boehner, the figure seated in the middle of the table, was the county judge from 1903-1911. There was no dedicated court house from 1865-1914. On file at the Livingston County Library archives.
​        In the years between 1866 and 1914, the Square became a tangle of weeds with livestock running loose. In the 1870s the town made an ordinance to keep livestock fenced which helped. But Dentist Dr. Jacob W. Greene envisioned a city park in this location. The county court allowed him to remove half of the black locust trees to clean up the park. When he appeared before the county officials afterwards, he confessed to having cut down the wrong half of the trees “in a way that convulsed the court with laughter.” Not your typical dentist. He was then allowed to complete the cleanup of the park. Benjamin Smith was enlisted to help and picked up maple and elm tree saplings from the river bottoms; in later years the maples, which accounted for three-quarters of the trees, were removed. The trees were planted by Dr. Greene, Hiram F. Woodford, and Scipie “Sip” Davis. On April 21, 1877, the three vowed to protect these trees as long as they lived. This became known as Elm Park. From pictures and stories we know there were benches, walkways, and a fountain. The old maps show a Bandstand in the park, dubbed the Public Square, in various locations at different times. The first Chillicothe Band was formed in 1891 under Ed Strong and gave weekly concerts in the park, presumably seasonally. Other concerts were held here including the Barrows’ Brass Band and the Chillicothe Cornet Band in 1891 and the Dunbar Bell Ringers and the Chillicothe Concert Band in 1902.
When the new courthouse was built in 1913-1914, Dr. Greene “denounced as wicked folly” the removal of many of the trees. 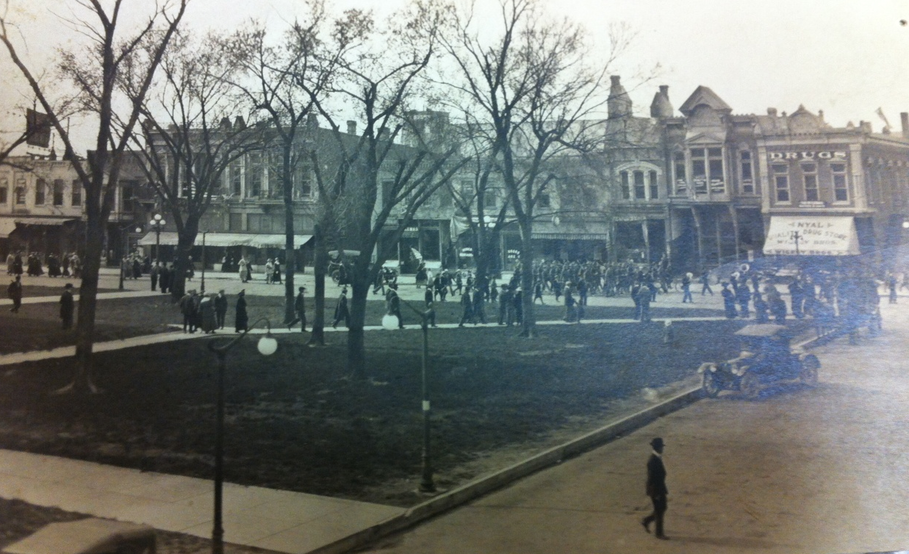 Elm Park facing northwest with a band moving east on Webster Street. Picture courtesy of the Grand River Historical Society & Museum.
​  The third court house was built in the middle of the Square where the current one stands. It was built in about 1840 and was torn down in c.1864. 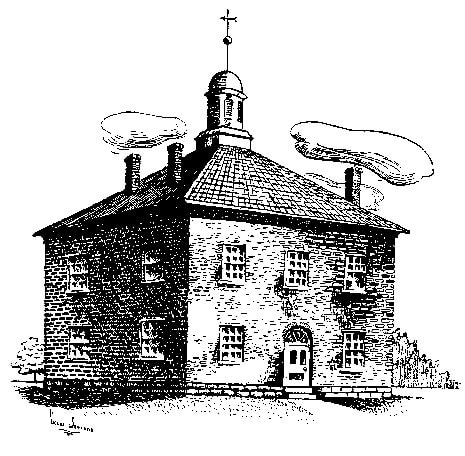 Third courthouse located in the Square. Picture taken from Roof's 1913 book, Past and Present of Livingston County. 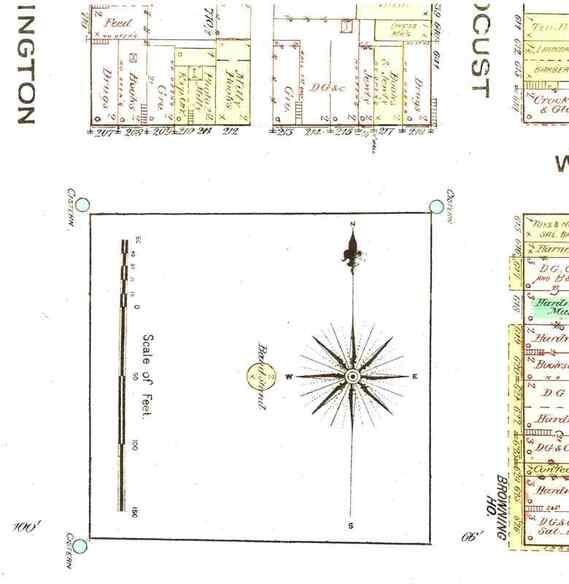 1885 Sanborn Map showing the Square with no courthouse.
​    The second modest court building was in block 11 at Cooper and Walnut, at Shelton's place.  According to the 1917-18 city directory which shows Shelton's address, this puts the court house at 600 Cooper Street. This court house was originally without windows due to some oversight in the design; they added them in shortly thereafter.
Cox's cabin was used in 1837 as soon as Livingston County became a county, but the founders put in for a new facility right away. Joseph Cox is credited as the first settler in the Chillicothe area in 1833. His cabin was located about 4 miles north of town. 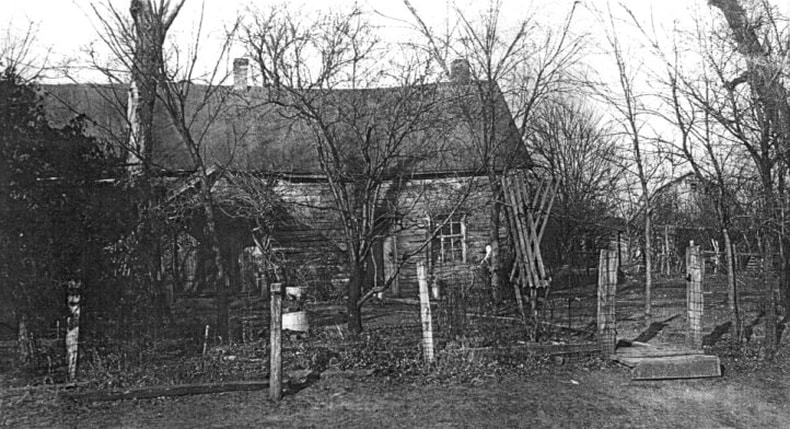 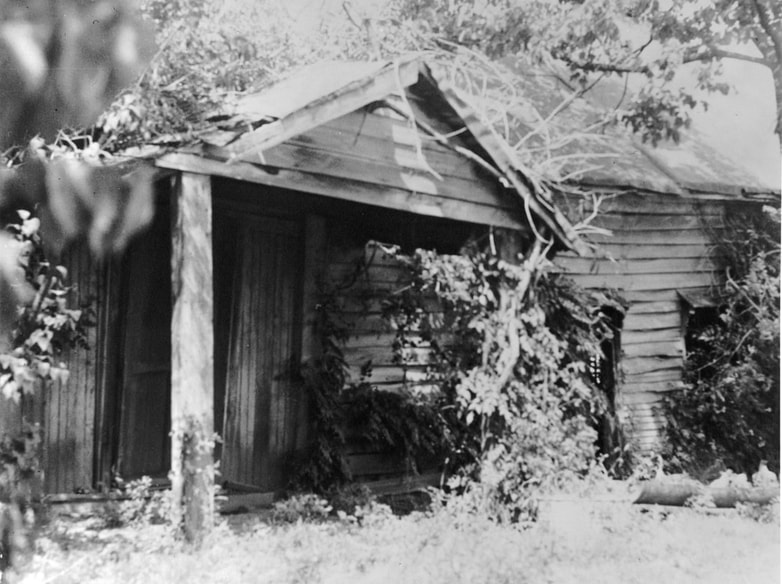