​447-449 Locust Street
This building was once a feed store, then the Empire Theatre. Over time it was renamed the Dickinson Theatre then the Grand Theatre. Now it houses office space. 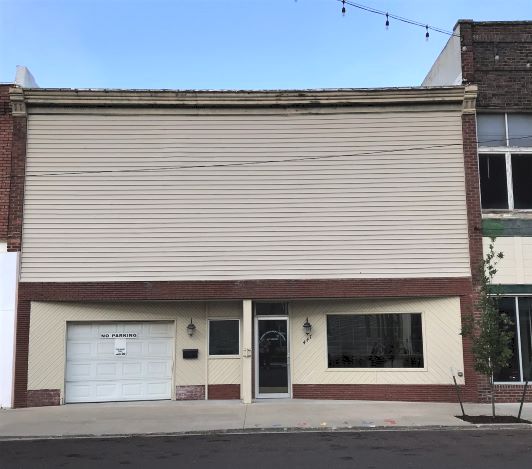 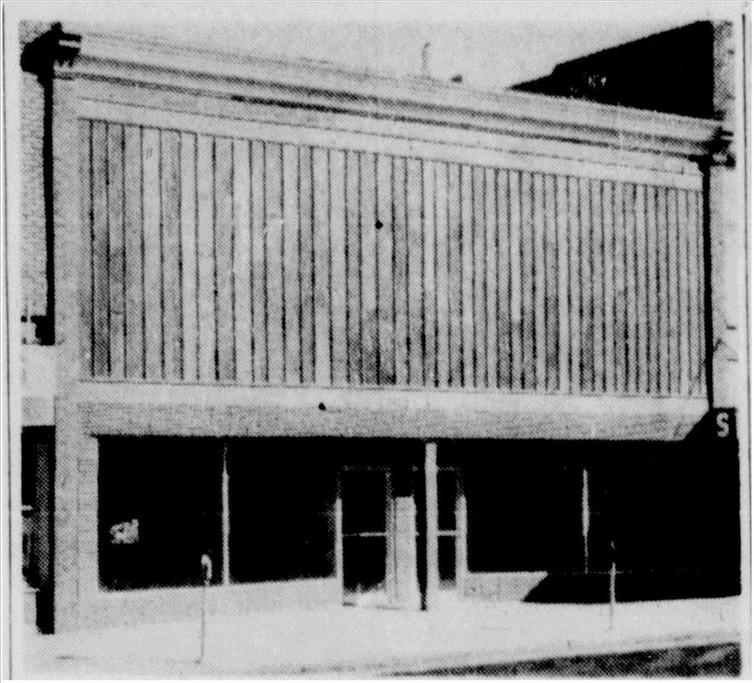 Picture from the Chillicothe Constitution-Tribune March 12, 1959.
​    The building has housed Moore Construction Company offices since 2006, but it was once the Grand Theatre.

There were a number of other businesses here after the theatre. In 2002 GE Financial Assurance insurance was briefly located in this building. No listing shows up for 2000. Hearthstone Handcrafted Gifts had a shop here for a short time in 1995. In the early 1990s Billi Bob’s had a used furniture and appliances store here. From about 1986 to 1990 North Missouri Monument Company was located here. North Missouri Electric (appliances) was here in the late 190s and early 1980s. The building sat vacant for most of the 1970s. May Earl Seed & Nursery Company was here in the mid-1960s.
​
The Grand Theatre closed its doors in 1952. In 1955, more than 40 years after it opened, the theatre, then owned by Dr. Gale, was dismantled and the building turned into regular business space. The 430 seat theatre, snack bar, and sloping floor were removed. The building remained vacant until the early 1960s. 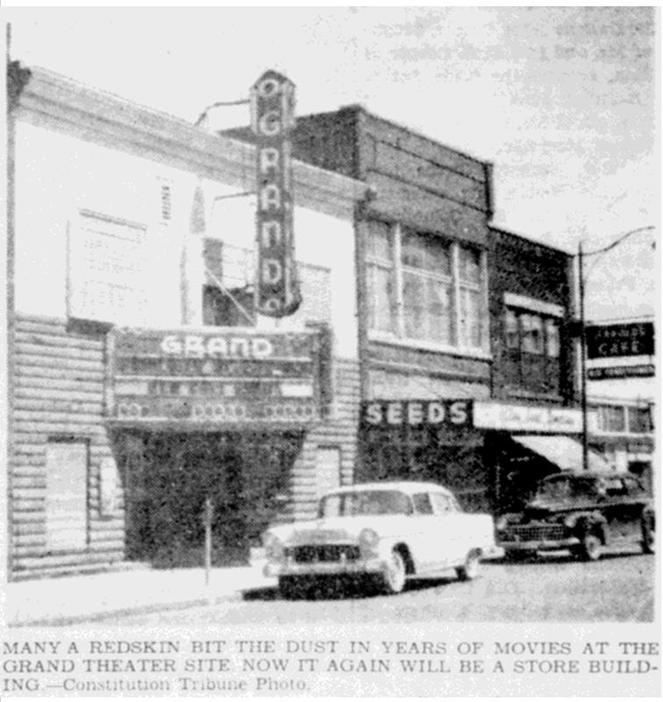 Chillicothe Constitution-Tribune June 16, 1955
​     In 1939 they help a contest to rename the theatre, and the “Grand,” suggested by Mrs. Marion Watkins, won. Some memories shared by locals said this theatre, in its later years, showed a lot of westerns, serials, and double features.
​
After the original Dickinson Theatre (then located at the Strand/formerly the Luella on Clay Street) burned in 1933, they remodeled the Empire Theatre, and renamed it the Dickinson Theatre. It re-opened on April 16, 1933. There is an amusing story from 1939 about the Dickinson’s sign-poster (as in one who posted signs). It appears he put up the movie posters for “Cisco Kid” all over town, upside down. Apparently folks couldn’t decide if he was drunk or had been sleep-walking! Great PR stunt either way.

​      In 1931, the Dickinson Company brought in a new manager, John Irvin, replacing C.L. Bacon. At that time, the theatre was known as the Empire and was owned by John G. Kling, who also owned the Strand Hotel and the Strand Theatre; he rented the facilities to the Dickinson Theatre. ​ 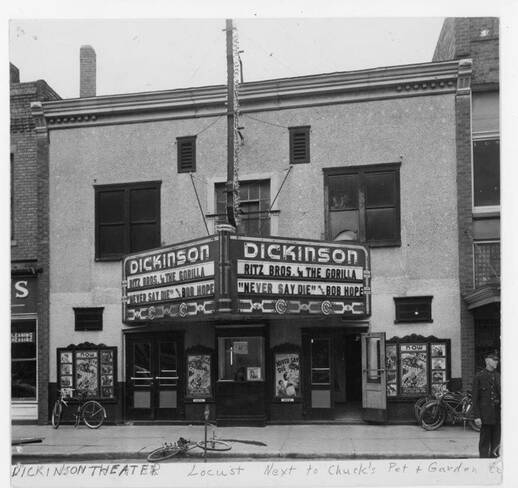 Unknown source on file at the Livingston County Library archives.
The Empire Theatre opened on August 2, 1916. It was owned by Dickerson Enterprises and run by James Boyle. Films were silent in those days so Stockton’s Orchestra was responsible for the music. The building was constructed specifically for showing moving pictures with a sloped floor so every seat had an excellent view (Chillicothe Constitution 8-2-1916). It had a seating capacity of 700 and a balcony. In 1929, this theatre became part of Glen W. Dickinson Theatre, Inc. 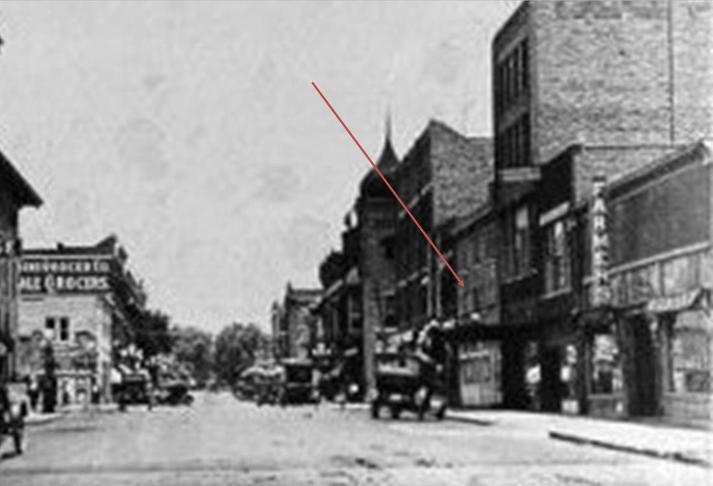 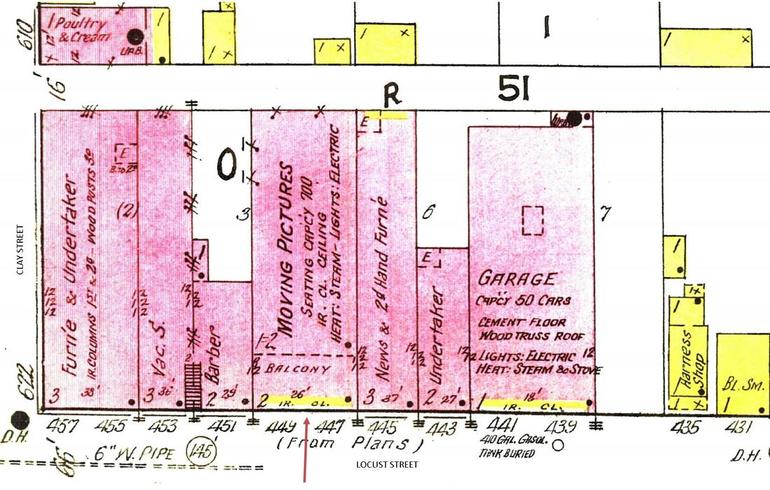 1916 Sanborn map
Prior to being a theatre, there was a single-story brick building here with a cobbler shop in the front corner.​ The building was originally a feed store, according to A.M. Meek, built about 1912 by Alec Fullerton. It was common for residents to keep cows and horses within the city limits, so feed stores in were high demand at that time.
​There are no buildings here on the 1896 and 1901 Sanborn maps.
​
There is a 2-story building in this location on the 1890 map with a single story in the back, wood frame shooting gallery. The 1885 map shows a single story saloon here. 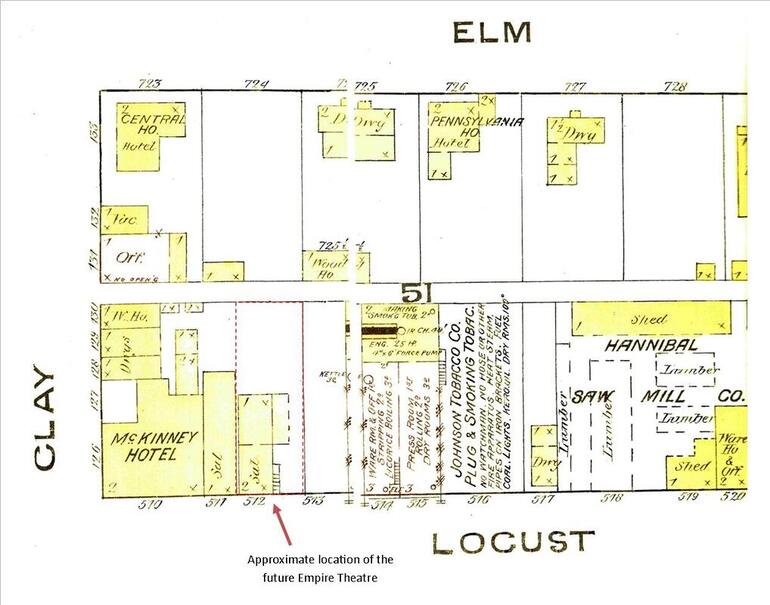