424 Locust Street
This was once home to a feed store, Nu-Icy bottling company, the Odd Fellows, and now houses the Art Guild's Cultural Corner.

June of 2019 after the Cultural Corner mural added. Picture courtesy of Kirsten Mouton.
previous building - cumberland presbyterian church
next building - adams automobile and supply company
HOME PAGE - TOUR AND DISCOVER
​The Art Corner renovated this old building, removing brick from windows, uncovering a lovely vaulted ceiling, and putting back the large garage-style door in the front. It opened in the spring of 2014 and serves to foster the growth of art to the North Missouri region. In 2018 a mural depicting the town's arts heritage with old theatres such as the Ben Bolt, Ritz and Luella, the bandstand that used to be in Elm Park where the court house is now, an old Chatauqua tent. Also represented are the current arts groups: the Arts Council (see the Ben Bolt marquis) and the Cultural Corner (see the sign by the ladder). The mural is meant to be interactive so one can "step into" the picture by pretending to work on an unfinished canvas, or stand in front of an old time cameraman, or maybe reach for an instrument on a park bench. 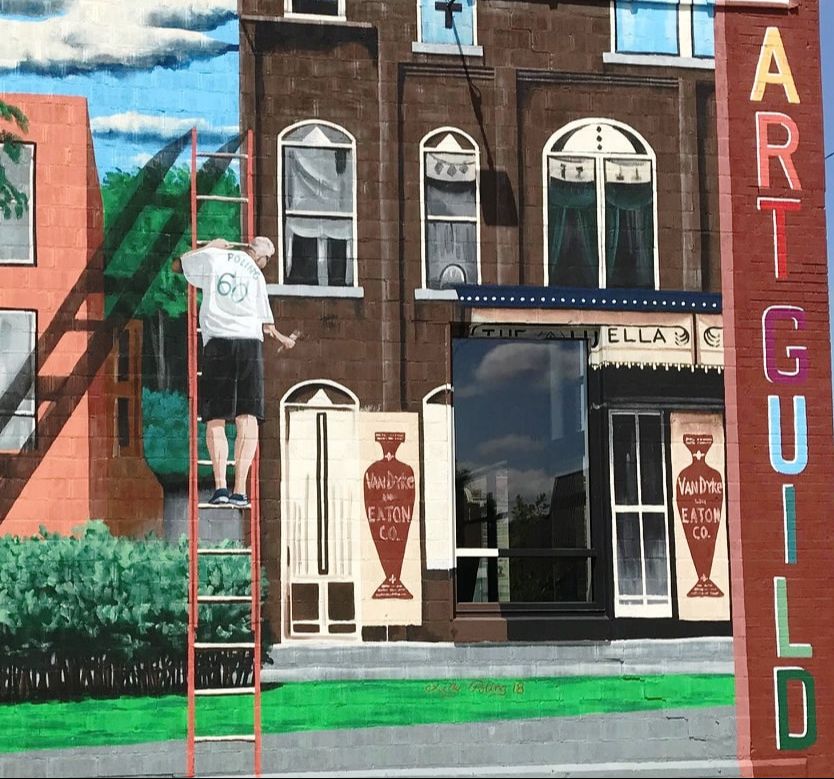 The Luella Grand Theatre (building #18 on this tour) is being painted here by the mural artist, Kelly Poling. This was Poling's 60th and final mural and the only one where he included himself (by request). Learn more about his studio at building #12 on this tour. Photo courtesy of Kirsten Mouton.
​    Previously, this building was the home of the Odd Fellows from 1992 to 2013. During this time different businesses occupied the space including Ballet Arts (Center for Dance), Foil Dance, and a yoga studio. 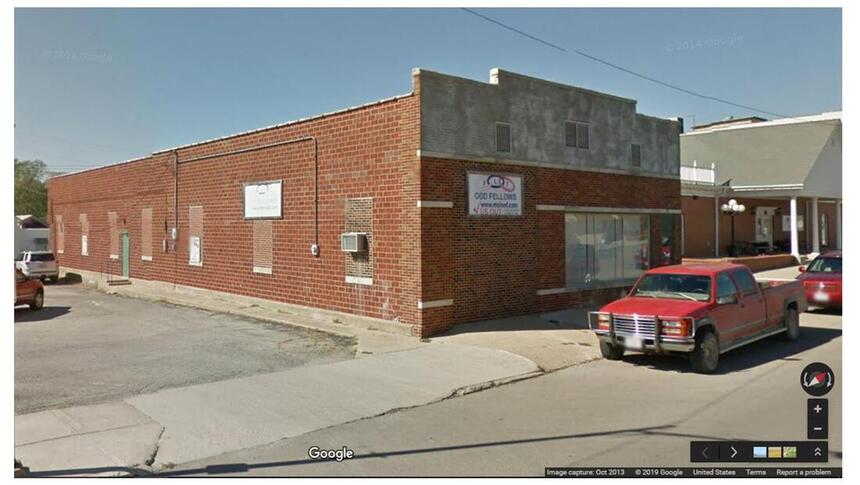 Google maps picture from 2013 while it belonged to the Odd Fellows.
​    From about 1982 to 1986 Kenneth and Helene Camp housed a furniture and auction business here. In 1986 Advanced Automatics transmission shop moved in and stayed until the early 1990s.
The 1970s saw several business at this location. Han’s Karate studio was here briefly around 1978. Nibargar Furniture store occupied the space from 1974-77.
North Missouri Lumber utilized the building starting in the late 1960s until the mid-1970s. In the mid-1960s the building was vacant.
C.M. Livingston and Taylor had a general contracting business based out of 424 Locust from the late 1950s to 1963.
The 1940s saw Swift & Company Produce based here. They purchased the building across the street in 1948 and moved in July of that year.

It is difficult to figure out what was here in the 1920s and 1930s as there is some discrepancy with the street address. Up until about 1927, the location of 424 Locust was the home of Charles Ireland and his wife and mother, presumably. Businesses, and the location of the current Art Corner, were actually at 412 Locust up to this point in time. The Irelands moved out in 1923, and by 1927 the home no longer appears on the map. It is not known when the street numbers were changed so that the current location of the Art Corner is now 424. Merchants Delivery at the corner of Locust and Ann Streets is listed on the 1927 Sanborn map as 404-410 Locust while the 1925 city directory lists it at 420 Locust. It is difficult to know what actually happened from existing historical resources.
In December of 1937 this became Wilburns Market. Earlier that year Nu-Lac Company (a feed store) had an office here.
There are ads showing Nu-Icy at 424 Locust Street in 1929 (although the structure at this address was removed by 1927). But in 1932, Nu-Icy was listed at 412 Locust Street; it is not clear if the moved or there was an issue or change with the street numbering system. The company was later bought out by Dr. Pepper, who was shown at 424 Locust through 1937. The Livingston County Farm Bureau had an office at 424 Locust for a shot time in 1929.
​Between 1917 and 1928 no businesses appear to have used the building.
The 1916 Sanborn map shows a sash and door warehouse here, as well as a carpenter’s shop. Hoge Lumber is listed at this location in the 1917-18 city directory.
​    Around 1905 a small building was constructed in this location with the street address of 412 Locust Street by T.E. Sallee. He operated a feed and coal store. L. E. Fullerton moved in to the “T.E. Sallee building” late in 1905. A small feed store was still located here in 1909.
​Prior to 1901, this was a vacant lot adjacent to a livery. In 1901 the livery was referred to McCormick’s on the Sanborn map. In 1896 it was Darr & Ireland’s Livery & Feed; and in 1890 it was McMillan & Darr Livery. The 1885 Sanborn map just states it was a Livery with a stable yard to the south/corner. Up until 1923, the home at 424 Locust belonged to Mr. and Mrs. Charles Ireland and his mother Georgia;  presumably these were the Irelands operating the livery.
​    It was difficult to figure out just where exactly the Cultural Corner Art Guild building was located in relation to the old maps and lots. Laying a street map from 2019 over the 1896 Sanborn map helped! It fit right over a vacant lot adjacent to the livery. 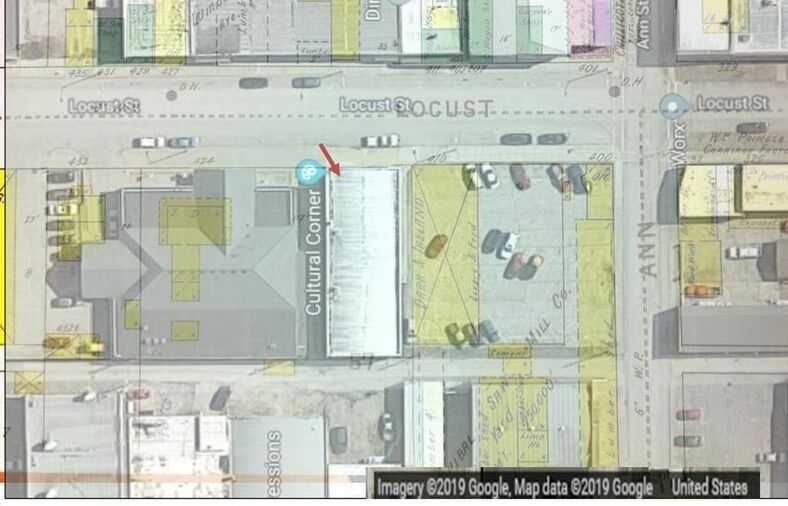