619-623 Locust Street
Look up and you will see the name "WALLBRUNN" on this building. Many businesses have been here including Jackson Business College, Clark Brothers clothing, and, of course, Wallbrunn clothing and furniture. The Wallbrunn's built a fabulous home on south Locust Street. 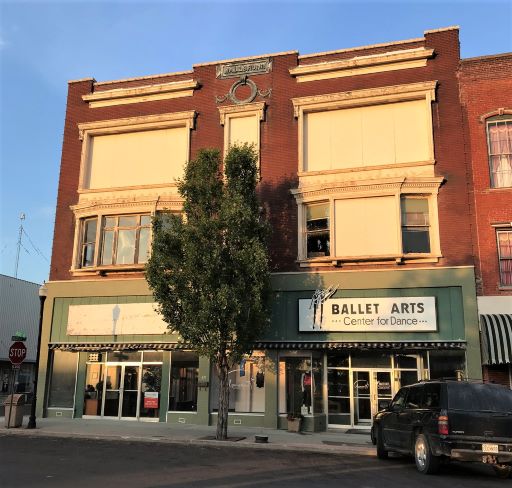 Photo courtesy of Kirsten Mouton, 2020.
next building - ELKS LODGE
previous building - first national bank
HOME PAGE - TOUR AND DISCOVER
​     In the early 2000s, Re/Max Grand River real estate and Ballet Arts were listed for this building, through about 2010. From about 2015 on, no listing appears in the city directory.
J.C. Penney Department Store was here from the late 1950s to 2000. The upper floors, rented until the late 1970s, included offices like Dr. Lee Jackson, dentist, Louis Stein tailor, Cies Insurance Agency.

This building is a contributing member of the National Register Courthouse Square Historic District. 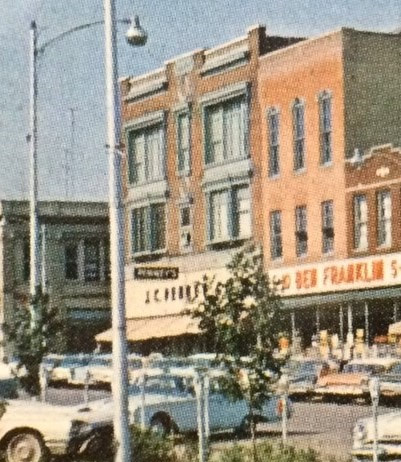 The building occupied by JC Penneys. Picture courtesy of Danny Batson.
​
​    Engelmann's moved here in the early 1950s.
Howell & Stein Clothiers were located here from about 1940 through the 1950s. Businesses on the upper floors included Mervin E Cies, John Hancock Mutual Life, Dr. Lee Jackson, R Warren Roberts, and the Veterans Administration.
The Jackson School of Business moved here (from its former location on the second floor of the New York Store on Locust St.) in 1910, when Jackson bought out the former Maupin College. It remained here through the 1930s. Other office space in the 1930s was rented out by businesses like , George Elliott of Shaeffer Realty and Dr. Girdner.
The Clark Brothers dry goods store was here by 1917 and stayed through the 1920s. Other businesses included Virgil Grace real estate, Charles Newman, Wallbrunn Berg & Howell, and AW Cies, Auctioneer as well as Shaeffer Realty and the offices of Drs. Girdner and Russell. The basement contained the Oriental, a billiards and bowling establishment. The bowling lanes went back at least as far as 1908. 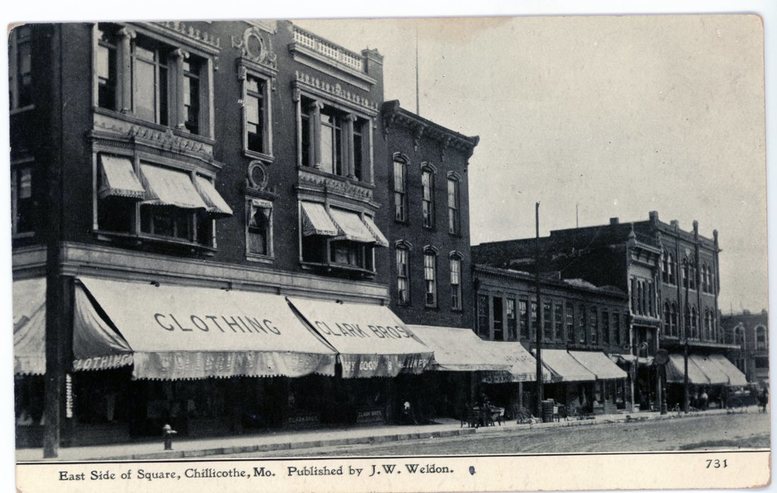 c. 1920 when the Clark Brothers had a store here. Photo courtesy of Robert Pigg. 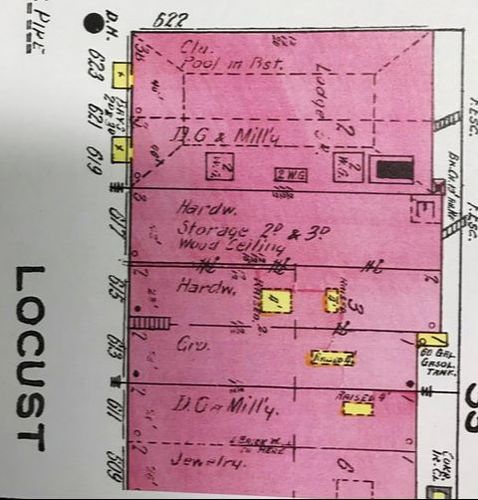 1909 Sanborn map
This was the location of the Wallbrunn and Berg store from at least 1890, and possibly back as far as the 1870-80s. If you look up towards the top of the building, you can still read "Wallbrunn" on the front. 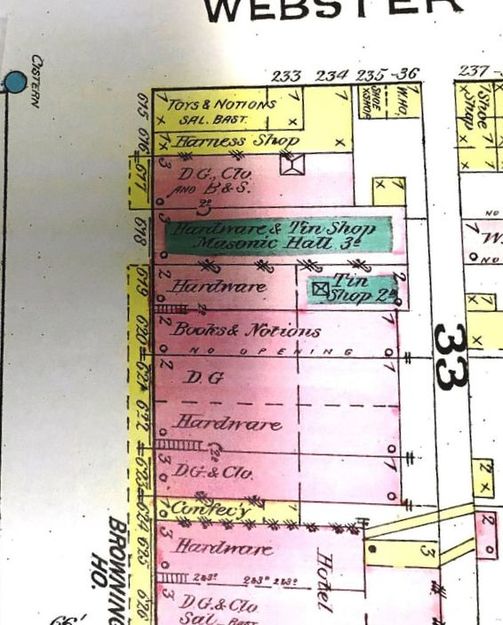 1885 Sanborn map showing the address was 615-17 Locust St. The single story portion had a toy shop and harness shop with saloon in the basement; the 3 story part of the building was dry goods with boots and shoes. There were some small outbuildings in the back.
​    The Wallbrunns built a magnificent house on south Locust Street in 1894, in what is now the parking lot of the North Missouri Center for Youth & Families building. Around 1907, the Jenkins family, who invented the Jenkins Hay Rake and Stacker, moved their factory to Chillicothe and bought this home. By the mid- to late 1940s, the F.R. Bailey family lived there. 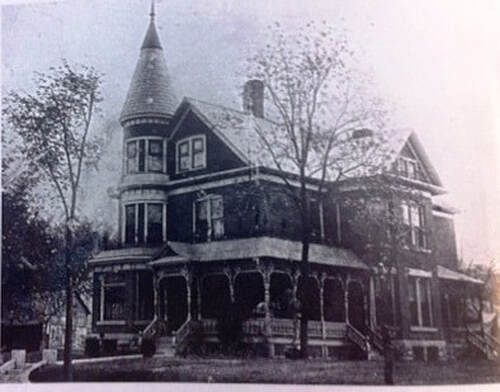 Jenkins home built by the Wallbrunns. Unknonw source. On file at the Livingston County Library archives.
​    The old Wallbrunn home and two others were torn down in 1958 to make way for a new Safeway. Later, this location became the Savage family grocery store.