​443 Locust Street
This was a funeral home in days gone by. Later this building housed a drug store, lunch counter, and cleaners. Most recently it was the art studio for Kelley Poling, our community mural artist for whom the Kelley Poling Arts District is named. 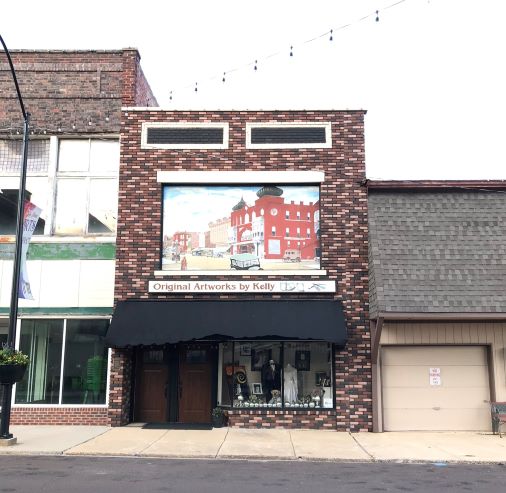 Picture courtesy of Kirsten Mouton, 2020.
next building - Philips Motor Company
previous building - J.E. Meek & company
HOME PAGE - TOUR AND DISCOVER
In November of 2019 Ed and Patrice Robertson purchased the Kelly Poling studio. They are currently renovating it and hope to rent to a business that is fitting for the Arts District. Some of Kelly's artwork will be permanently displayed here.
On March 11, 1998, Kelly & Angela Poling opened their store, Original Artworks by Kelly. During the next 20 years, Kelly painted 60 murals, with his 60th and last being on the south wall of the Art Guild building. Chillicothe boasts 23 of those murals along with 1 "ghost sign." Kelly passed away Dec. 2, 2018 from cancer. 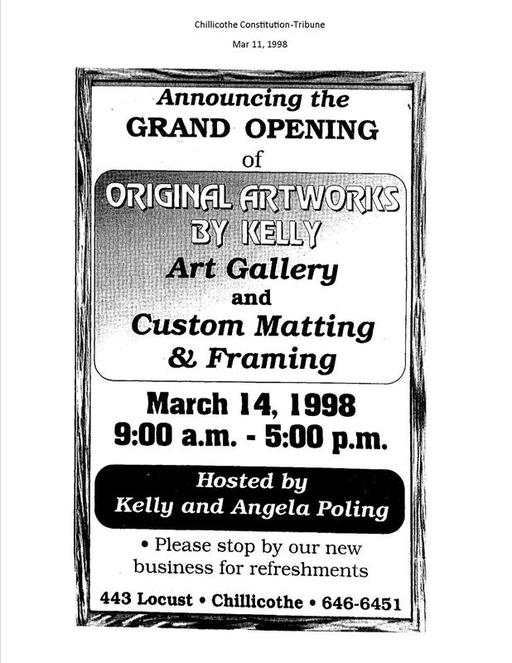 Bare Essentials kids clothing occupied the space in the early 1990s.
On June 1, 1980, Newkirk Cleaning and Rainbow equipment rental moved in, selling and repairing vacuum cleaners. Carpet cleaning by appointment was added in 1983 with a name change to Newkirk Cleaning Company. In 1986, this company moved to another building on Washington Street. 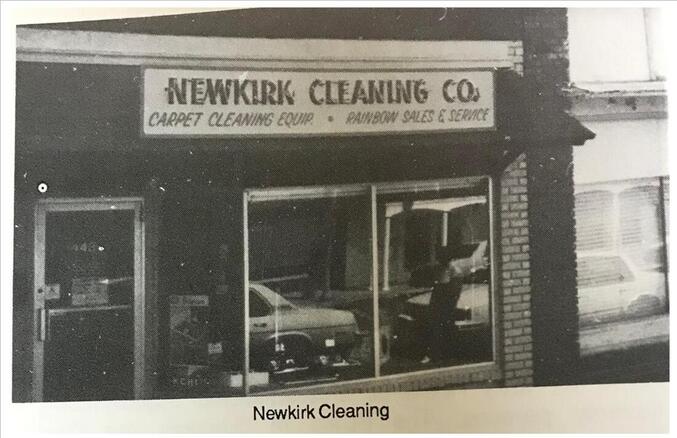 Picture from RSVP's (Retired Senior Volunteer Program) 1987 Livingston County History Sesquicentennial 1837-1987.
The 1970s saw Montgomery Ward catalog sales use this building; their main building was the imposing 3-story structure right across the street. Larry and Barbara Sherrow ran the sales office.
In June of 1952, Mr. and Mrs. Harold D. Pulliam bought the Frosty’s café business at 443 Locust Street. In 1959 the Pulliams bought the building from the Ewing estate. From 1952 to 1972 this was known as Harold's Cafe.​ In mid-1972, the Pulliams sold the business and went to run the Chillicothe Country Club dining room and kitchen.
For many years, up through the 1950s, a Jehovah Witness group used the upstairs to meet.
In the late 1940s to 1951, this was known as Frosty's, run by Mr. and Mrs. Walter A. “Frosty” Williams.
Edwards Cafe was here from the mid-1930s to about 1947. Walter Edwards lived upstairs. In 1936 Mrs. Minnie Edwards and her son Walter opened “Edwards Café” in Trenton. She moved up there to help run the new café; while she was gone her daughters, Mrs. Erma Thomas and Alma Edwards, and other son, Allen, ran the restaurant here in Chillicothe. In late 1937 Mrs. Edwards came back to Chillicothe to “take charge” of the local restaurant. In 1938 Mrs. Edwards and Walter closed their restaurant in Trenton and moved the equipment to their café in Chillicothe. They decided it was a good time to remodel the building, adding a kitchen to the back. At some point Walter married Mary Margaret Page. He enlisted in the Navy in 1942 and was discharged in late 1945, returning to Chillicothe to continue running the café. His time in the Navy was spent in the commissary.
​    ​In 1925 Dick’s Café was located here. ​Gray's Pharmacy moved here in December of 1926. They also served ice cream and dispensed candy and added a lunch service in 1928. They  moved out in 1932 to the (future) Winkelmeyer Building (then known as the Piper Building).
Norman and Jarvis two-story funeral home was located here starting in 1916.  (Later they built a large funeral home across the street where the parking lot for Lifepoint church is now. This was known as the Norman Funeral Home and later, the Norman-Wagy-Singer Funeral Home. This building burned down in the early 2000s.) Jarvis Realty was also based here. 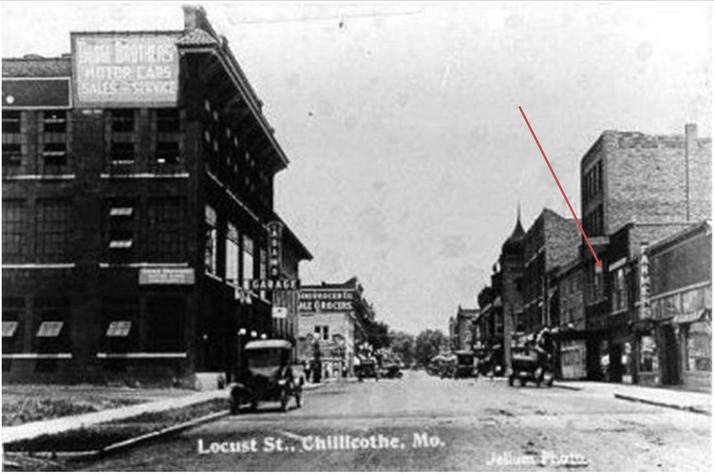 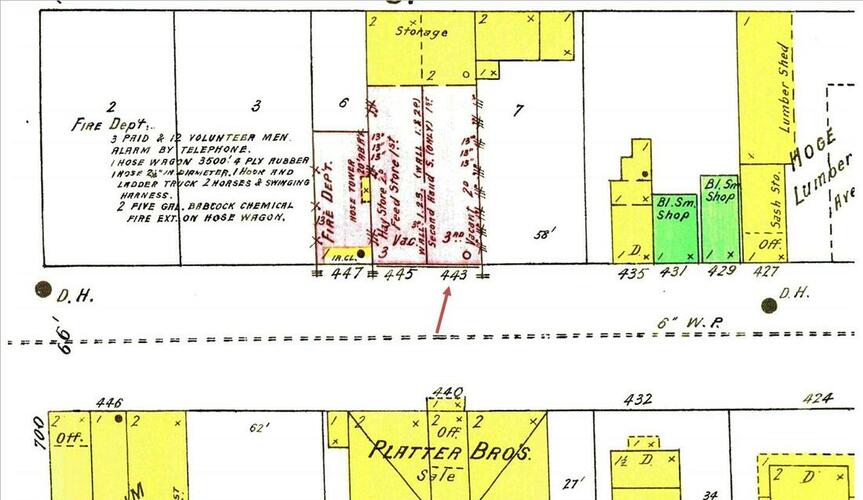 1896 Sanborn map
The earlier maps of 1885 and 1890, also numbered 514, show a Ware Room and office on the first floor; "stripping" on the second floor;  and on the third floor, licorice boiling. The back of lot was used for tobacco processing. There is an ad in 1891 for Mendenhall and Company on south Locust, likely the second hand store mentioned on the maps.   ​ 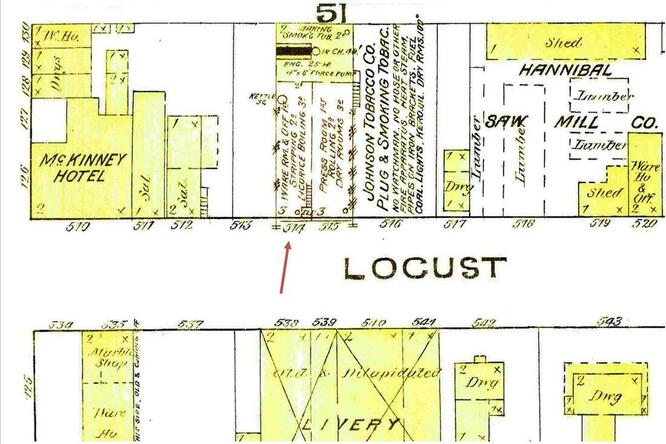 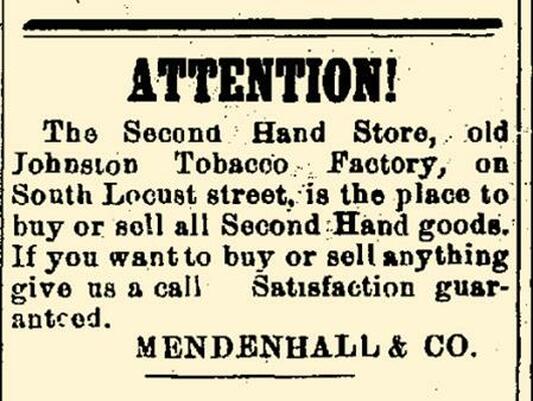